Could LeBron James and Dwyane Wade Be Reunited in Cleveland? 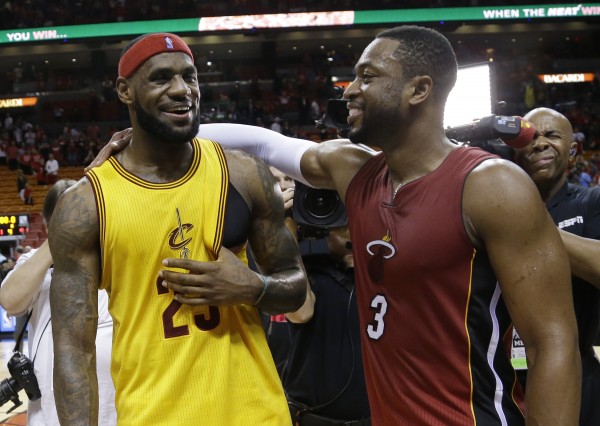 The status of Miami Heat guard Dwyane Wade is up in the air with reports that Wade may opt out of his two-year deal with the team. That’s led to contract negotiations that supposedly have both sides far apart on the value of Wade to the team.

While Wade’s likely contract demands may not be in line with the salary cap limitations the Cleveland Cavaliers will likely be under, it’s important to remember that immediately after the Christmas Day game between Wade’s Heat and the Cavaliers, he and LeBron James engaged in a brief conversation that was caught on tape.

In the video, James could be heard saying something like, “We’re gonna reunite again and do some better and better things alright.”

While that doesn’t necessarily mean that Wade might be headed to the Cavs, James was very successful in convincing some other former veteran teammates to join him this year in Cleveland. Both James Jones and Mike Miller signed deals with the Cavaliers, though Miller has seen minimal action all season.

The lone former teammate he was unable to convince to join the squad was Ray Allen, who ended up not signing with anyone and is presumably now retired.

The friendship of James and Wade was one of the reasons that James took his talents to South Beach in 2010, so the idea of Wade taking his talents to the North Coast isn’t entirely out of the realm of possibility.

Wade was scheduled to make $41.6 million over two years beginning this past season, but had opted out of that contract in order to make room for more talent, including what he expected to be Miami’s re-signing of James.

James instead came to Cleveland and Wade ended up with a $31 million two-year deal that allowed him to opt out after this year.

In addition to the contract contortions that would be needed to pull it off, finding Wade enough playing time might also be difficult. With J.R. Smith and Iman Shumpert already in place at shooting guard, Wade might be forced to serve as Kyrie Irving’s backup at point guard.

Such a circumstance would likely not be appealing to the 33-year-old 12-year veteran who averaged 21.5 points and dished out nearly five assists per game last season. However, the injuries he’s suffered over the past four seasons have limited him to an average of 59 contests.

That shaky health status has been noted by Heat team president Pat Riley who said about Wade, “He’s got to change the narrative himself about his body and about his injuries and about his missing games. And we had a discussion about this. But he always has to answer those questions, and I know those questions are legitimate because they’re real. So night in and night out, there’s always the question of whether or not he can or he can’t.”

A scenario of Wade signing with Cleveland has always been considered a long shot, but then James wasn’t expected to make the decision he did last July. That changed the Cavaliers from a team struggling just to get to the playoffs to one just four wins away from an NBA title.