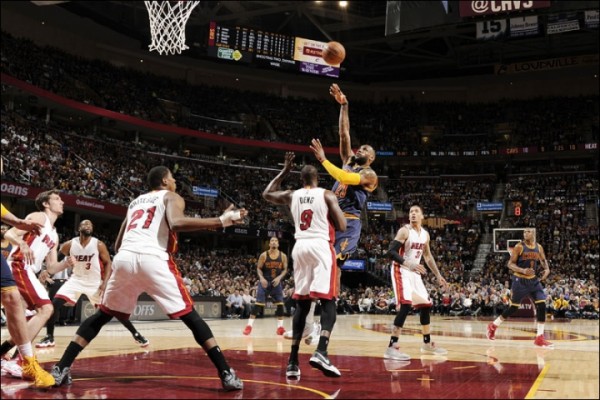 (Cleveland, OH) – Sparked by a second quarter run that gave them a double-digit cushion for the rest of the game, the Cleveland Cavaliers knocked off the Miami Heat, 114-88, in Thursday night action at Quicken Loans Arena.

The win was the Cavs 17th straight at home and ends the season series between the two squads, with each team winning twice. Both units could potentially meet again in a first round playoff series, with Cleveland taking another big step toward solidifying its second seed position in the Eastern Conference with a 49-27 mark.

Despite being questionable for the game after missing the morning shootaround, Cavalier point guard Kyrie Irving shook off any lingering illness by sharing the game scoring lead with LeBron James with 23 points. The Cavs’ other question mark, power forward Kevin Love, did sit the game out with lingering back issues.

Afterward, Irving spoke of the challenges ahead and the importance of homecourt, saying, “We want to take care of business at home, we just have to come in with intensity.”

Both teams shot better than 50 percent from the field in the opening quarter, but in the first six minutes, the game was tightly contested with both teams trading leads. The Cavaliers soon put together a 12-4 run, including seven unanswered points to cap the surge and make it 30-22 in favor of the Cavs with 2:12 left in the quarter.

Iman Shumpert connected on a turnaround jumper at the buzzer to make it 34-27, which sparked an 18-4 run that gave Cleveland its biggest lead of the half at 50-31 with 6:30 left before halftime. A little while later, Shumpert hit his third trey of the quarter to make 55-37.

However, the Heat were able to chip away at the huge margin with seven unanswered points to make it 59-48 with just over a minute to go before the break. That 11-point deficit would be how the half ended with the Cavaliers holding a 61-50 advantage.

Within the first minute of the second half, the Cavs had sandwiched threes from Irving and James between a Miami basket to push the lead back up to 15 at 67-52.

Each time that Cleveland attempted to put the game away, the Heat were able to stay within breathing distance. Midway through the third, following two free throws from Timofey Mozgov, Miami scored five points within the next minute to reduce the margin back to 10 points at 75-65.

Both teams had mini-runs, but after the Heat scored with 2:11 left in the third, the Cavs closed out the third quarter with eight straight points. James converted a three-point play, Tristan Thompson contributed a thundering alley oop dunk and J.R. Smith drilled a three in the final 10 seconds to make it 91-73 after three quarters.

Thompson’s dunk was impressive enough that he was seen after the game checking his phone and saying, “I gotta see how it looks.”

Miami never got much closer than that for the rest of the game, with back-to-back threes from Matthew Dellavedova unofficially putting the game away to make it 99-76 with 8:04 left. Garbage time officially took over, with James coming out for good with 4:29 left and Irving following just 40 seconds later.

Besides the 46 points from Irving and James, Shumpert added 17 and Thompson scored eight along with 15 rebounds.

The Heat lost guard Dwyane Wade late in the first half due to injury and he was unable to return. He had been questionable earlier today after Miami’s shootaround due to illness.

In postgame comments, Cleveland head coach David Blatt talked about maintaining the same level of play going into the playoffs by saying, “The way we’ve played has been successful and that’s what we’re going with.”

Blatt also joked about the controversy over James calling plays by adding, “I called the plays, and he went in the post. For those of you wondering.”

The Cavaliers will stay home for an Easter Sunday matchup against the Chicago Bulls beginning at 3:30 p.m. ET.