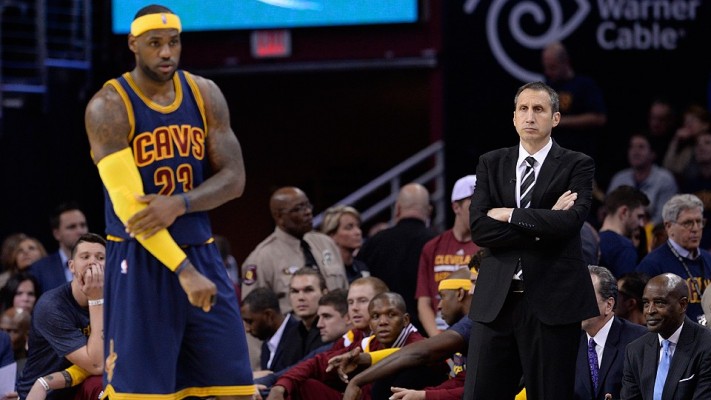 The question of how important David Blatt’s contributions to the Cleveland Cavaliers‘ success over the past few months was called into question by ESPN.com’s Brian Windhorst, on Tuesday afternoon.

Windhorst was a guest on Bill Simmons’ podcast when he said that the Princeton offense that Blatt brought with him when he was hired has effectively been junked. In its place is essentially whatever LeBron James happens to be calling, a circumstance that Windhorst says has been taking place for approximately three months.

“LeBron will take the ball, and LeBron will call the play,” said Windhorst, who added, “David Blatt will see what play LeBron calls, and he will repeat it to the team. That happens on a regular basis.”

That time frame neatly coincides with the vast portion of the team’s success in which they’ve won 28 of their last 35 contests.

This isn’t the first time that Windhorst has made this charge. At the depths of the team’s struggles in mid-January, he claimed that assistant coach Tyronn Lue was calling timeouts behind Blatt’s back.

At that same time, Windhorst also stated that Cavs players were frequently discussing the coaching problems with opposing players.

It’s perhaps telling that no other sportswriter has made that claim, and there’s been no confirmation by anyone connected to the Cavaliers, either on the record or anonymously.

In addition, the alleged controversy of James pushing Blatt out of the way during the January 13 loss to the Phoenix Suns mirrored a similar circumstance during James’ first year with the Miami Heat.

In both cases, a team struggling and in turmoil had James reportedly push the head coach. In each instance, the team experienced a renaissance of success immediately afterward.

Blatt, in his first season as an NBA head coach after decades of coaching at the international level, has often made a point to praise the contributions of James to the team’s success.

The Cavaliers will next be in action at home on Thursday night for an 8 p.m. ET contest against Miami.