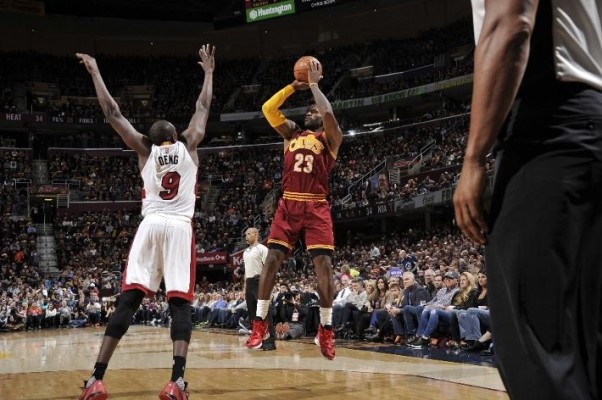 (Cleveland, OH) – Using a 20-6 run during the course of the third and fourth quarters helped the Cleveland Cavaliers take control of their game against the Miami Heat and come away with a 102-92 victory at Quicken Loans Arena on Friday night.

Miami trailed by just five at 68-63 with 2:46 left in the third quarter when the Cavs began their push that saw them hold an 88-69 lead with 6:59 to go in the contest. They’d extend their advantage to as many as 20 before the Heat sliced that final margin in half during garbage time.

The win boosts Cleveland’s season record to 2-1, while Miami watches its record even out at 1-1 on the young season. The 92 points that the Heat scored marked the third straight game that the Cavs have held an opponent under 100 points. LeBron James spoke briefly about what their defense needs to do to keep thriving:

“Communication is the number one thing we have to continue to focus on,” said James.

“It’s more of the same from the second half of last season,” Blatt said. “Our defense was really the key. We stressed the connectivity and it’s continued.”

James and Kevin Love paced the Cavalier offense with a combined 53 points, with Love collecting his second straight double-double on 24 points and 14 rebounds. James, who had 29 on the night, was especially efficient with his shooting, hitting 13 of his 19 field goal attempts. The duo also combined for nine assists.

Concerning that efficiency, James explained why that component of his game had improved:

“I told our team that I wasn’t very efficient last year,” James said. “I work on rhythm, and obviously I’m a lot more comfortable this year.”

In addition, Tristan Thompson continued to show that he wasn’t suffering any rustiness from missing training camp by managing to nearly collect his own double-double with 13 points and nine rebounds.

Blatt spoke about how Thompson has been able to quickly transition to his old self:

“It took some time. It took three games,” said Blatt sarcastically. “He doesn’t need a lot to be successful. The big thing for me was him getting the rhythm more quickly than I thought he would.”

Prior to pulling away in the fourth quarter, the Cavs had made continual attempts to build on their lead, but each time Miami was able to keep within striking distance.

James (10) and Love (9) provided the bulk of the team’s scoring in the first quarter, accounting for 19 of the 29 points that provided the Cavs with a six-point advantage. Despite connecting on just two of seven shots from the field, Love made all five of his free throws and also grabbed six rebounds, including four on the offensive side.

In the second quarter, the Cavaliers scored seven of the first nine points to take a 36-25 lead with 9:18 remaining before intermission. However, for the remainder of the half, the team struggled with its shot, hitting just 31 percent of their attempts as Miami reduced their deficit to just five by halftime to trail 47-42.

Unlike Wednesday night’s blowout, Cleveland’s prowess from long range was lacking as they made just six of 25 three-point shots. However, the bench again provided solid support with 33 points.

That bench support got the attention of Blatt, who was asked about what that group’s identity should be:

“That they’ll be a factor in the game,” said Blatt. “Now, we want our bench to be impactful. They’re coming into the game and making a difference.”

Mo Williams was also queried about the bench:

Meanwhile, the ball movement that had been evident in the first two contests didn’t start to emerge until the third quarter. In the first two periods, the Cavaliers had just eight assists, but in the third quarter alone, they had 12 and finished with 25 on the night. Matthew Dellavedova led that push with 10 dimes on the evening.

“It’s just moving the ball,” said Williams. “We don’t want to put the ball on one player’s shoulders. We just want to get the ball hopping.”

On the boards, the Cavs were also in control, holding a 49-38 overall lead. They were especially dominant on the offensive side with a 14-6 advantage.

Next up for the Cavaliers is a trip to Philadelphia to face the 76ers on Monday night, with tip-off set for just past 7 p.m. ET.