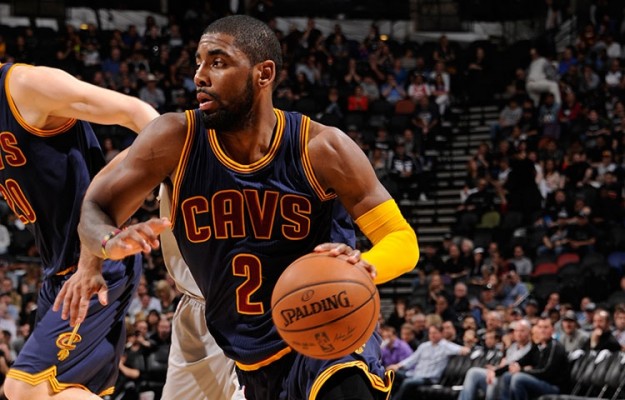 The record-setting effort broke the Cavs’ previous scoring mark of 56 by LeBron James against the Toronto Raptors on March 20, 2005, and eclipsed Irving’s own 55-point performance against the Portland Trail Blazers on January 28.

James’ hit a three with 1:54 left in overtime to give Cleveland the lead for good at 119-116, then sandwiched another three around Irving’s seventh three-pointer of the night to make it 125-120 with 32.4 seconds to go in the extra period.

Two more free throws from Irving, followed by a free throw from James closed out the Cavs’ scoring to clinch the game with 10.5 seconds left. James added 31 points to give the duo 88 on the night.

Irving scored six in the first (including the first basket of the game), 16 in the second, eight in the third, 16 in the fourth and 11 in overtime. He connected on 20 of his 32 field goal attempts, and hit all seven of his threes and all 10 of his free throws.

However, it was his dramatic buzzer beater to send the game into overtime that served as his biggest shot. That capped what had been a furious comeback in which the Cavaliers trailed 110-104 with 33.9 seconds left.

The six-point Cavs deficit was chopped in half on a three by Irving with 31 seconds left to make it 110-107, but the Spurs were on the verge of clinching it when Kawhi Leonard stepped to the line with 4.3 seconds to play for a pair of free throws.

However, Leonard missed both ends, with Irving got the rebound and immediately called time out with 3.1 seconds left. He then connected for the trey that sent the game into the extra session.

Immediately after the game, Irving was asked how he was able to put up those numbers and responded, “Just our screen and roll game.” He also gave credit to teammates, saying, “I’ll go to war with these guys.”

However, it was Gregg Popovich that basically said it all when he commented, “Kyrie Irving was unstoppable. I don’t know how to guard that. He did a hell of a job.” Poppvich later added, “He really went to a new level tonight.”

The game, which had a playoff-type intensity throughout, saw San Antonio take the lead in the latter stages of the second quarter and hold it until Irving’s tying three at the end of regulation. The Cavaliers’ offense had problems at times with the aggressive Spurs defense that swatted away nine shots on the evening.

Earlier in the fourth quarter, the Cavs had a chance to tie the game at 90 with a little under eight minutes to go in the game, but Irving was called for an offensive foul. San Antonio then tallied seven of the next nine points to boost their lead to 97-90 at the 6:24 mark.

Cleveland had two shots to stay in the game with just under five minutes to go on a Tristan Thompson dunk that made it 99-95 in favor of the Spurs. Then, after getting a rebound, a missed shot followed soon after by a turnover allowed San Antonio to score six straight points, the last coming on a technical on James that made it 105-95 with 3:05 to go.

That appeared to finish off the Cavs, but they were able to keep close enough to make that final push that got them to overtime.

In the opening six minutes of action, both teams put up impressive numbers from outside before each cooled off. That busy back-and-forth pace kept neither squad from taking control, with the Spurs gaining no better than a four-point edge, while the Cavaliers managed to briefly hold a three-point advantage.

The Cavaliers showed good movement with the ball, dishing out eight assists during the opening quarter. The starters provided all but two points in those first 12 minutes, with Kevin Love’s eight points leading the way. Love would be held scoreless for the remainder of the contest, with back trouble the reported reason for his struggles.

Thompson’s putback dunk with 1:25 left made it 30-27 in favor of the Cavs, but San Antonio managed to split a pair of free throws before connecting on a three in the final 10 seconds of the quarter to give them a 31-30 lead.

James powered much of the Cleveland offense in the early portion of quarter number two, scoring seven straight points to twice give the Cavaliers a four-point lead. However, with the Cavs leading 41-37, the Spurs ran off nine unanswered points, a push that was ended by an Irving jumper with 6:48 left in the half.

That basket by Irving was the first of 14 straight points by the point guard, which included a pair of spinning layups that got Cleveland within one at 56-55 with just over three minutes remaining before intermission.

After J.R. Smith’s three gave the Cavaliers a 58-56 lead, San Antonio tied it back up and then took the lead on a three-point play from Tim Duncan. After the basket, Smith was whistled for a technical, which was converted by the Spurs to make it 62-58. By the time the halftime horn sounded, the Cavs had chopped that deficit in half to trail 64-62.

What became a physical third quarter began with San Antonio notching nine of the first 12 points to take its biggest lead of the game at 73-65, before Irving sandwiched another pair of threes to make it 75-71.

Cleveland got as close as three at 82-79 before a layup by Duncan with 29.6 seconds left closed out the scoring for the quarter that put the deficit at five for the Cavaliers and laid the groundwork for Irving’s heroics.

The Cavaliers now head to the Sunshine State to face back-to-back road games on Sunday and Monday night. The 6 p.m. ET Sunday clash will be against the Orlando Magic, followed by a contest against James’ old team, the Miami Heat in an 8 p.m. ET matchup.