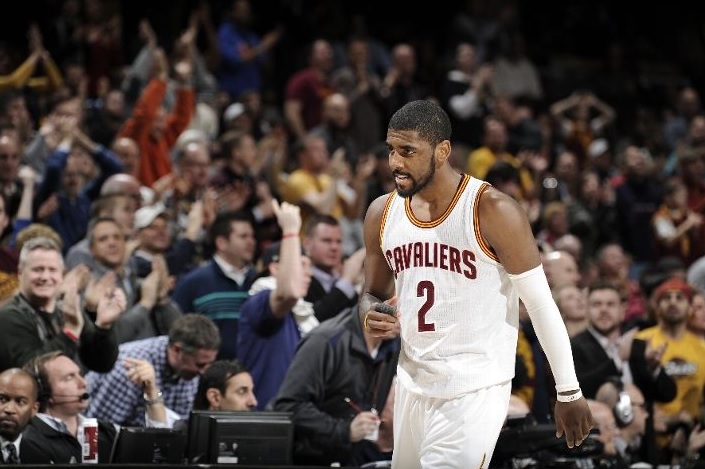 With the game deadlocked at 94 with 27.6 seconds remaining, Irving brought the ball up the court and waited until 6.4 seconds remained before connecting on a three-pointer. Then, after a Portland desperation shot in the closing seconds, Irving got the rebound and was fouled with 2.1 seconds left. He made both free throws to clinch the game.

In postgame comments, Irving said, “It feels amazing, but I’m just glad we got the win.” He then commented about the clutch three, saying, “It was a big-time shot, and that comes after all those hours in the gym.”

Irving’s previous high of 44 was set last April 5th in a home game against the then-Charlotte Bobcats. He was 17 of 36 from the field, connecting on 11 threes, and scored 12, 16, 11 and 16 in the respective quarters. He also scored 33 of his points in the final two minutes of each those four quarters. Perhaps the most amazing stat might be the fact that Irving missed his first seven shots from the field.

The point explosion tied for the second-highest individual scoring game in team history, matching LeBron James’ 55 against the Milwaukee Bucks in 2009. James holds the record with 56, set against the Toronto Raptors in 2005.

James sat out the game after getting an MRI at Cleveland Clinic earlier in the day that diagnosed a right wrist sprain. He sustained the injury during the third quarter of Tuesday night’s win over the Detroit Pistons when he fell over the Pistons’ Jodie Meeks and landed on his wrist. Prior to tonight’s game, the Cavs were 1-8 this season when James was unable to play due to injury.

Head coach David Blatt said that despite the team’s poor record without James, “We came into the game with a better feeling.” Part of the improved attitude, according to Blatt, was because of the continued improvement of the team’s defense. “We can do more things because of our defense and that’s a good thing.”

In the first seven minutes of the fourth quarter, Irving was the lone Cavalier to score, adding six points. J.R. Smith finally added to Irving’s contributions to make it 87-84 with 4:58 to play, but Portland answered with consecutive threes to first tie the contest, then take the lead.

The Trail Blazers’ LaMarcus Aldridge, who finished with 38 on the night, then hit both ends of a pair of free throws at the 27.6 mark, which led up to Irving’s game-winning finish.

Afterwards, Mozgov commented about the importance of his free throws, saying, “You just don’t think about the pressure, you just do it.”

Tristan Thompson talked about Irving’s scoring binge, noting, “He put the team on his back and he had a great performance. He definitely leads by example, and he’s now more vocal on the court.”

Blatt was equally enthusiastic about how Irving was able to bounce back after his slow start. “He just played the game and took advantage of his opportunities,” said Blatt.

Regarding the 38 minutes that Irving was on the court, Blatt said, “I thought we did a good job of managing his minutes, and those brief spells where he was out seemed to rejuvenate him.”

At the beginning, after allowing the opening basket of the game, the Cavaliers ran off seven unanswered points, only to see Portland tie them up. A 9-2 run that began with a pair of Kevin Love free throws then provided them a lead they’d hold until the fourth quarter dramatics began.

Love again endured a rough night from the field. The power forward connected on three of his first four shots, but then missed his final 11 attempts. He also put a brief scare into the crowd when he went down holding his knee with under four minutes to go, but was able to stay in the game after some brief treatment.

While the Trail Blazers got within three on three different occasions soon after, the Cavs scored 11 of the last 15 points of the stanza to take a 31-21 lead after one quarter of action.

The final two minutes of the first was a precursor for what would happen next: Irving, whose only point prior was on a technical foul shot, scored 11 in that brief span, including a pair of threes. Then, in the next 12 minutes, he’d add 16 more to give him 28 for the half.

The closest Portland would get during the quarter was six at 33-27 with just over 10 minutes left. For much of the period, Cleveland maintained a double digit lead, with Irving’s four treys leading the way.

Irving’s last three gave the Cavaliers their biggest advantage at 54-40 with 1:03 left, but the Trail Blazers chipped the deficit down to ten before the halftime horn sounded with the Cavs holding a 54-44 lead.

Portland was able to cut the margin in half by the end of the third to make it 79-74 in favor of Cleveland. The surge was fueled primarily due to Aldridge, who scored half of the Trail Blazers’ 30 points for the quarter.

However, Irving added 11 more points in the third, and was aided by Mozgov’s eight. For the third straight time, Irving closed out the quarter with a flourish, scoring eight of those points in the final two minutes.

The next game on the Cavaliers’ docket is a Friday night home matchup against the Sacramento Kings, with James’s status considered doubtful. The Cavaliers will be seeking revenge for their embarrassing 103-84 loss in Sacramento on January 11.