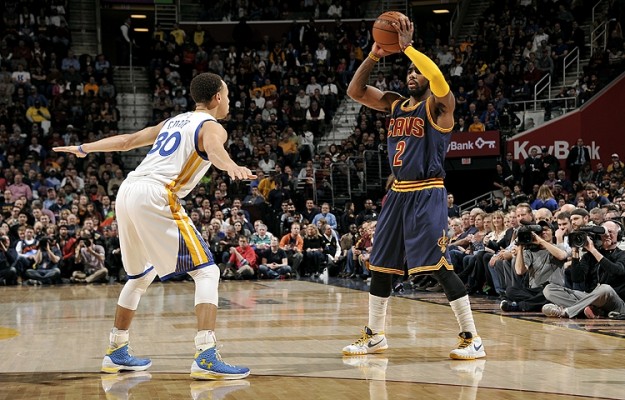 In a move that was expected, Cleveland Cavaliers point guard Kyrie Irving is officially ruled out of Friday night’s contest against the Indiana Pacers as a result of a shoulder injury suffered in the 110-99 victory on Thursday against the Golden State Warriors.

The fourth-year guard out of Duke University underwent an MRI at the Cleveland Clinic on Friday morning. After the Golden State game, Irving was listed as doubtful and didn’t travel with the team to Indiana.

The injury took place during the third quarter, and after it happened, he was seen rotating his shoulder on the bench. However, his game didn’t suffer, finishing with 24 points and hitting all 10 of his free throws.

This will be the fourth game that Irving will sit out this year. After suffering a knee contusion in a Christmas Day loss to the Miami Heat, he sat out the next two games: a win over the Orlando Magic the next night and an embarrassing home loss to the Detroit Pistons on December 28.

That injury took place two weeks after a scary moment in a December 11 defeat versus the Oklahoma City Thunder, when he left the game in the second half after falling to the ground and holding his knee in obvious pain.

Irving also left a January 4 loss to the Dallas Mavericks with back tightness and sat out the next night’s loss to the Philadelphia 76ers.

After Friday night’s game, the Cavaliers have an important road battle against the Houston Rockets on Sunday afternoon. While there’s presently no indication what Irving’s status for that clash is, two days of rest should speed up the recovery process.