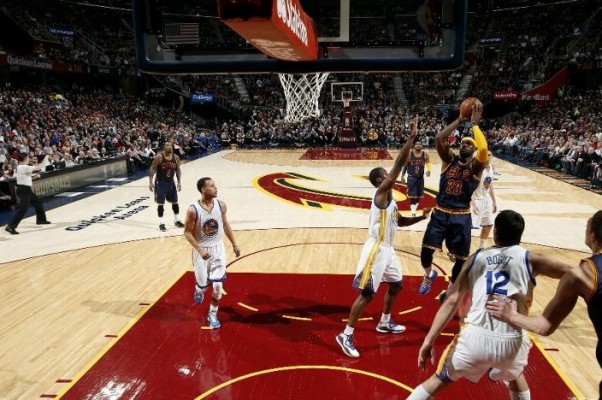 (Cleveland, OH) – Behind 42 points from LeBron James, the Cleveland Cavaliers knocked off the team with the NBA’s best record, the Golden State Warriors, in a 111-99 victory at Quicken Loans Arena on Thursday night.

James also added 11 rebounds for a double-double, while Kyrie Irving pitched in with 24 points. Timofey Mozgov contributed a double-double of his own with 10 points and 10 boards.

The turning point of the game came in the early portion of the second half when the Cavaliers ran off twelve unanswered points to turn a 65-61 lead into a 77-61 cushion. Not surprisingly, James led the charge during this push, scoring nine of those 12 points.

For the rest of the quarter, the Cavs were able to keep the margin in double-digits, with Golden State getting as close as 10 at 86-76 with 1:37 to play. Two quick Cleveland baskets moved the lead back up to 14, before the Warriors scored the final basket of the third to make it 90-78.

James put it simply after the game, saying, “I was just being a triple threat tonight. I get hyped to go out and play the game I love.”

Over the course of the game, the Cavaliers were able to rein in the rapid-fire play of the Warriors, who entered the game with an NBA-best 44-10 record. After allowing 33 points in the first quarter, they held Golden State to 66 the rest of the way.

Cavs head coach David Blatt explained the success of the defense after the first quarter, saying, “That speaks well to what we did defensively. We really did a good job in the paint and attacking on defense.”

Blatt added, “We came to play,” noting that while the duo of J.R. Smith and Iman Shumpert scored just four points, they were able to hold the duo of Stephen Curry and Klay Thompson to just 10 of 30 from the field. Curry missed nine of his last 10 field goal attempts.

James also mentioned the defensive effort in postgame comments, saying, “That’s been our staple of late. We played at a high level for 48 minutes.”

Blatt commented on James’ performance, saying, “He was in attack mode from moment one. LeBron’s been playing some of his best basketball in his illustrious career since he came back.”

Kevin Love‘s comments about the key to the defense’s success was, “Just forcing them into tough shots. They’re not going to have too many games like that.”

That fast-paced opening stanza saw neither team able to get more than a four-point lead as the two squads combined for 65 points with 11 lead changes and five ties.

James and Irving paced the Cavaliers during the opening 12 minutes, combining for 22 points. James’ 13 saw him close out the quarter with two layups and a pair of free throws in the final minute of action.

Midway through the second quarter, Love and Irving hit back-to-back threes to make it 49-43, and the Cavs were able to maintain the lead for the rest of the half.

In the waning seconds of the first half, Thompson’s dunk closed out the scoring to give the Cavaliers a 61-56 advantage at the break. Of the 29 points the Cavs tallied in the second, 17 came from James and Irving.

James’ 24 points at the half came via some torrid shooting by connecting on seven of his nine outside shots, including both of his attempts from long range.

The Warriors were able to keep pace with Cleveland by dishing out 18 first half assists, compared to just eight by the Cavaliers. They added 14 more after the break, but it wasn’t enough as their record dropped to 44-11. The Cavs improved to 37-22 and now have won 18 of their last 20 games.

James looked to temper any talk of this contest being a preview of the NBA Finals, saying, “We’re not trying to send a message. We’re just trying to improve every game.” He added, “We just have to stay even keel and play aggressive.”

Irving said the key to the team’s success was, “Just keeping our composure. It’s a big win for us. I’m just glad we got the W.”

This game marked the beginning of what will be a brutal stretch for the Cavaliers, who are set to play six more games in the next nine days. Their next game will take place in Indiana, with the Cavs looking to gain a measure of revenge after the Pacers put an end to their 12-game winning streak three weeks ago. Tipoff is set for just after 7 pm ET.