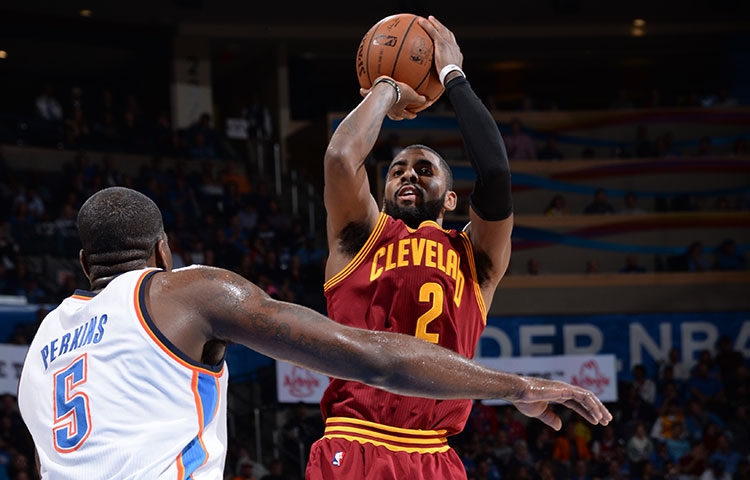 (Oklahoma City, OK) — A near-miraculous fourth quarter comeback came up short as a Cleveland Cavaliers team without the services of LeBron James lost a 103-94 road decision to the Oklahoma City Thunder in Thursday night action at Chesapeake Energy Arena.

Oklahoma City’s 29-8 run that spanned across the third and fourth quarters proved to be too much to overcome. The defeat put an end to the Cavs’ eight-game winning streak, dropping their season mark to 13-8 on the year.

Over the next five-plus minutes, the Cavs got as close as a four-point deficit at 95-91 after Tristan Thompson tipped in a Kyrie Irving layup attempt with two minutes remaining. From that point on though, Oklahoma City’s Kevin Durant put the game away by scoring eight out of the final 11 points.

Besides missing James, the Cavaliers had a huge scare in the first half when Irving was injured trying to block a shot by Russell Westbrook, landing awkwardly on his left knee with 1:31 remaining. Irving stayed down and was helped off the court, but actually came back to start the second half and finished with a team-high 20 points and six assists.

For the most part, the first half was a back-and-forth affair. It began early in the opening quarter, which first saw the Cavaliers jump out to a 5-0 advantage, courtesy of a pair of free throws and a three from Irving. Oklahoma City then followed with six unanswered points, but Cleveland quickly answered back with a 15-4 push to make it 20-10 with 4:10 to play in the stanza.

Six different players notched baskets during the surge, but the Thunder whittled the lead to four at 22-18 with under two minutes remaining. Matthew Dellavedova then tallied a three and Tristan Thompson split a pair of free throws with 38.3 seconds to go to give the Cavs an eight-point lead at 26-18.

Part of Oklahoma City’s early problem stemmed not only from their poor long range shooting, where they failed to hit any of eight three-point attempts, but also the seven turnovers they committed. In the latter category, they only had four more turnovers the remainder of the contest.

At the 10:31 mark of quarter number two, veteran James Jones was fouled attempting a three-pointer and converted on his trio of free throws to make it an 11-point margin in favor of Cleveland at 31-20.

The Thunder answered with a 7-0 run, only to see the Cavaliers bump it back up to a nine-point advantage at 36-27 with 8:12 left before intermission on another Dellavedova three.

Oklahoma City took back the lead with a 16-4 surge that was capped by a Westbrook dunk to make it 43-40 with 2:06 remaining before the break. The Cavs’ play during this stretch was marked by cold shooting that saw them hit one of 12 field goal attempts, commit three turnovers and put forth an overall sloppy effort.

The Thunder also had two more three-point leads before Dion Waiters hit a three from the left corner with 1.9 seconds left to tie the game back up at 47 after two quarters.

After returning to the court to start the third, Cleveland briefly led on three occasions, the last time coming on a pair of Kevin Love free throws that made it 54-53 with 8:59 to go in the quarter.

Less than three minutes later, Love knotted the score at 57, but Oklahoma City took control of the game over the final half of the third quarter, outscoring the Cavaliers 21-8 to take a 78-66 lead into the fourth.

The Thunder then scored the first eight points to complete the run and give them an 86-66 advantage that provided enough cushion for the Thunder.

Love and Thompson once again collected double-doubles on the night, with Love scoring 18 and grabbing 16 boards and Thompson notching 14 and hauling down 13 rebounds.

Dellavedova ended with 14 on the night and was one of the few effective outside shooters for Cleveland, which hit 31 of its 85 attempts for a weak 36.5 shooting percentage.

In their second back-to-back this week, the Cavs will travel to the Big Easy to face the New Orleans Pelicans on Friday night in a game that will tip off shortly after 8 pm ET.