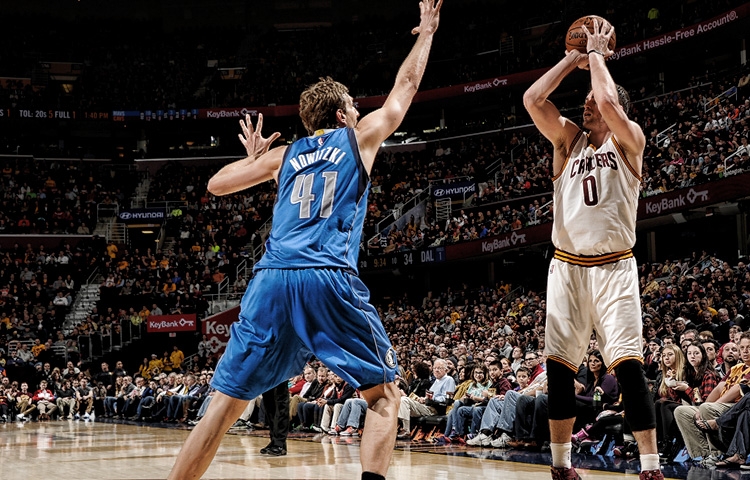 (Cleveland, OH) – Being on the wrong end of a 14-3 second quarter run proved to be deadly for the Cleveland Cavaliers, who dropped a 109-90 decision to the visiting Dallas Mavericks on Sunday afternoon at Quicken Loans Arena.

The loss drops the Cavaliers to 19-15 on the year, with the team having dropped five of its seven games since the season-ending injury to Anderson Varejao on December 23.

The game itself changed for good in the second quarter with Dallas holding a lead that they extended to seven on five different occasions during the first six minutes. The Cavs were able to stay close, as Mike Miller drilled a three with 5:58 to play before intermission to make it 43-39. However, the Mavericks surged ahead with a key 14-3 run to make it 57-42 with 2:20 left.

The Cavaliers answered with five points from Shawn Marion in the final minute to chop their deficit to 10 at 57-47 when halftime arrived. Kevin Love and Marion had combined for 29 of Cleveland’s 47 points, with Love also hauling down eight rebounds.

Dallas would maintain its double-digit lead the rest of the way, scoring just 14 seconds into the third. The Mavericks eventually boosted their advantage to 21 points in the quarter, while the Cavs could only get to within 10 twice.

Another ominous sight came when Kyrie Irving was pulled from the game during the quarter due to lower back tightness. Irving was obviously affected by the problem during the time he played, hitting just two of his nine field goal attempts for six points on the afternoon.

After the game, the team announced that Irving would not travel with the team to Philadelphia for their Monday night game against the 76ers. While that doesn’t officially keep him out of the contest, his status is likely doubtful, considering his postgame remarks. Irving said he was feeling a good deal of pain and stated that a fourth quarter fall in the team’s win over the Charlotte Hornets on Friday night was when the pain began.

Kyrie Irving says he is in “a lot of pain right now.” First hurt it in Charlotte game. “Sometimes your body is telling u when to stop.”

Cleveland head coach David Blatt simply said after the game about taking Irving out, “We didn’t want to risk him, so we pulled him out.”

Blatt also summed up the team’s performance, saying, “We didn’t defend the three-point shot well, and got beat too many times at the point of entry.” The Mavericks nailed 12 three-pointers to improve their mark to 21-14 on the year.

A 12-4 run midway through the third quarter effectively ended the game, with Monta Ellis’ three-pointer making it 82-63 with 4:22 to go in the quarter. At the end of the third period, Cleveland trailed 89-71.

In the fourth quarter, the best the Cavaliers could do was  get the margin down to 12 following a three-pointer from Love that made it 94-82 with 8:40 left in the game. It would take almost three more minutes before the scoreboard changed for the Cavs, while Dallas tacked on five more points to end any hopes of a dramatic comeback.

In that final quarter, only three Cleveland players were able to score: Love, Dion Waiters and A.J. Price, with the latter’s six points the only offense generated by the Cavaliers in the final 5:52 of the contest.

Love led all scorers with 30 points and also grabbed 10 rebounds to collect another double-double, with Marion and Matthew Dellavedova the only other Cavs to reach double figures in scoring.

Afterward, Love gave credit to the Mavericks, saying, “They just go out and play and it showed.” Love also said, “They create mismatches. They play big and small. When they play downhill like that, they’re hard to stop,” and added, “Against them, you can’t make too many mistakes.”

Blatt commented about Love’s last two games, in which he’s scored 57 points, saying, “He’s maximizing his touches right now. He’s getting in good spots and making the most of his opportunities.”

For the Mavericks, four of their five starters scored in double figures, led by Ellis’ 20 points. The lone starter not to reach that threshold was newcomer Rajon Rondo, who finished with just four points, but added eight assists.

In the opening moments of the game, Dallas held a 6-3 lead, but by the midway point of the quarter, there had been six lead changes. While the Mavericks spread the offense around, the Cavs’ early scoring was once again paced by Love, who tallied 10 of the team’s first 15 points.

Tristan Thompson only scored four points for the Cavaliers during the first quarter, but both his scores came off outstanding passes from teammates. Cleveland took its first lead at 7-6 with 8:09 to go when Thompson was fed a behind-the-back pass by Irving for an easy dunk. Six minutes later, Thompson again scored via a dunk off a Marion pass.

While both teams made their fair share of field goal attempts in the first, neither squad was terribly effective from long range, connecting on just three of 11 shots as Dallas led 28-25 when the buzzer sounded. Soon after, that buzzer would sound on the Cavs’ opportunity to win.

The aforementioned trip Philadelphia for a 7 pm ET tipoff on Monday night to face the woeful 76ers is next on the Cavs’ agenda. On Wednesday night, the Cavaliers return home to face the Houston Rockets before beginning a tough five-game road trip against the Golden State Warriors on Friday night.