Cavaliers vs. Magic Game Recap: LeBron Drops 15 in the Fourth 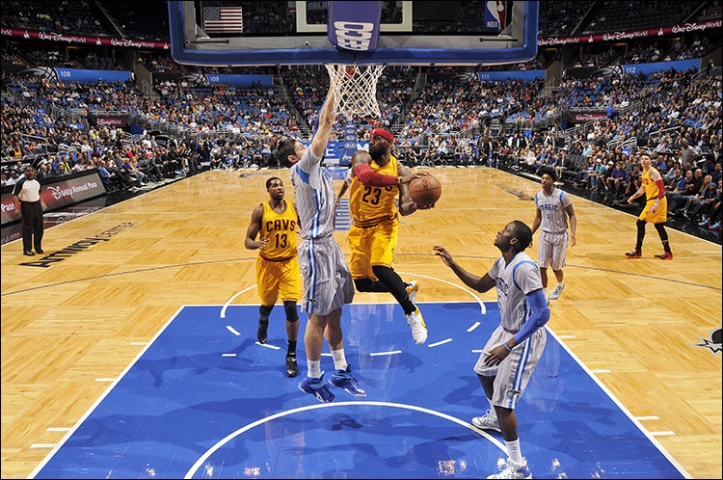 One of the key plays down the stretch came with 4:36 left in the contest when James split two defenders and tossed in a tough shot while getting fouled. Converting that free throw boosted the Cavalier margin to four at 87-83 and began a 14-6 run to close out the game.

The Cavaliers, who held the Magic to just 14 fourth quarter points, were without the services of Kyrie Irving, who sat out the game after suffering a knee contusion during the final minute of Thursday’s loss to the Miami Heat.

Cavs’ head coach David Blatt praised both Love and Thompson for their defensive effort, saying, “We didn’t double him (Vucevic) much, but they both did a great job on him tonight.”

After James’ three-point play, Thompson then collected one of his own for a 90-83 lead with 4:04 remaining. Each team then traded a basket over the next 90 seconds.

With just under two minutes remaining, the Magic got within three at 92-89, then had a chance to get even closer following a Cleveland miss. However, a turnover gave the Cavaliers the ball back and set up a James’ three-point play to make it 95-89 with 40.7 seconds left.

A pair of Orlando misses twice put James back on the line in the final 30 seconds, with the veteran connecting on three of the four attempts to close out the game’s scoring.

At the start of the fourth quarter, the Cavs trailed 75-71, tying the game in the opening minutes of the fourth, before briefly take the lead at 79-78 on a pair of Waiters’ free throws. The Magic answered with a basket to re-take the lead, but James and Mike Miller gave Cleveland the advantage for good at 84-80 with 6:42 left in the game.

One unique aspect of the fourth quarter was that Love sat out the entire quarter despite being injury-free. The decision was based on the matchups that pointed toward a smaller lineup.

Love had no problem with the decision when asked after the game when the last time he was in that situation. “It’s been a while, but more importantly we got the win.”

James was asked about Love’s fourth quarter status and said simply, “It shows what his mind set is.” James also saw the team-first approach as a positive, adding, “We took a step forward tonight.”

Blatt was asked about James’ fourth quarter performance and said,

“LeBron’s the best player in the world. That’s what he does.” Blatt also explained why Irving was a healthy scratch during warmups. “He just didn’t feel loose enough,” said Blatt, who said about the team’s reaction, “Sometimes that awakens something in people.”

At the outset of the game, Orlando jumped out to a 4-0 lead before the Cavs charged back with 10 of the next 12 points. The last three points of that push came with just under nine minutes to go in the quarter on a three from Matthew Dellavedova, who took Irving’s place in the lineup.

Dellavedova said the call to start didn’t come as a big surprise. “I knew there was a chance he might not play, but I didn’t really change my approach.”

Over the next four minutes each team traded mini-runs, with the Magic scoring four points, followed by four from Cleveland, followed by five from Orlando that gave them a 15-14 advantage with 5:18 to go in the stanza.

After Love converted a three-point play soon after, Victor Oladipo knotted the score at 17 with 4:46 to play. Less than one minute later, the Magic took the lead for the remainder of the quarter, creating a six-point margin at one point. By the time the first quarter ended, Orlando held a 32-27 lead.

In that first quarter, Love and James provided a major portion of the offense with 19 points, 13 coming from Love.

Despite that effort, the Cavs trailed primarily due to the torrid outside shooting of Orlando, which hit over 72 percent of its first quarter attempts.

The Magic started hot in quarter number two, scoring seven of the first nine points for a 39-29 lead, but the Cavaliers chipped away at that deficit. When Waiters scored on a layup with 3:28 to go before intermission, the game was tied at 45.

Orlando would inch ahead, only to see the Cavs either tie the game or stay close. At the end of the half, Cleveland trailed by a 53-49 score.

As in the opening quarter, the scoring punch provided by the Cavaliers was focused on a limited group of players. Love (17), Waiters (13) and James (10) supplied more than 80 percent of the first half offense.

In the first five minutes of the second half, the three-pointer was the Cavs’ weapon of choice, with all four field goals coming that way to give Cleveland a brief lead at 62-60. After Orlando scored the next four points and had possession, James stole the ball and notched a three-point play to make it 65-64.

James’ score came shortly after he and Tobias Harris were involved in a brief altercation which led to both being assessed technical fouls. Asked after the game about it, James said,

“I have zero problem with Tobias Harris. I don’t know what problem he has with me.”

However, soon after the James three-point play, the Magic ran off 10 straight points in a span of just over two minutes. The last six points came on threes from Channing Frye and Evan Fournier to make it 74-65 with 2:34 left in the quarter.

Still, the Cavaliers answered with six unanswered points and had an opportunity to get even closer, but a miss with less than 10 seconds to go resulted in an Orlando split of free throws with just 0.6 seconds to play, making the score 75-71 in favor of the Magic after three quarters.

The Cavs now return home for a Sunday afternoon contest against the Detroit Pistons that will tip off at 4:30 pm ET. Cleveland will then close out 2014 with a road game next Tuesday against the Atlanta Hawks and a New Years’ Eve home bash against the Milwaukee Bucks.