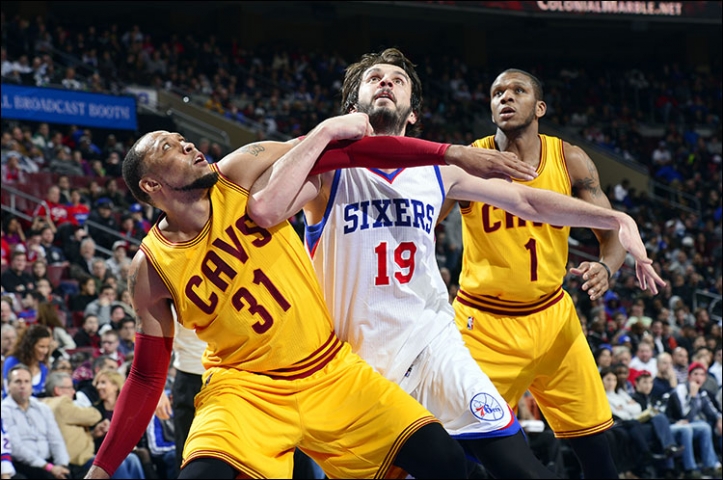 (Philadelphia, PA) – The Cleveland Cavaliers managed to fall apart and lose 95-92 to the Philadelphia 76ers on Monday night at Wells Fargo Arena.

In a stunning three-team trade with the New York Knicks and Oklahoma City Thunder in the middle of the contest in Philadelphia, the Cavs acquired guards J.R. Smith and Iman Shumpert in a trade that sent shooting guard Dion Waiters to the Thunder.

In return, the Thunder shipped a protected future first-round draft pick and small forward Lance Thomas to the Knicks, NBA league sources confirmed. Another component of the blockbuster trade involves Cavaliers center Alex Kirk and forward Lou Amundson being sent to the Knicks.

Being selected 12th overall by the Cavs in the 2012 NBA draft out of Syracuse, Dion Waiters struggled to live up to the Cleveland’s expectations. As a sixth man for the Cavs this season, Waiters has averaged just 10.5 points per game as well as shoot only 25.6% from three-point range.

Other than the shenanigans occurring outside of the game in Philadelphia, the Cavs managed to blow a 17-point third quarter lead to the 76ers, who were previously 0-14 at home before finally knocking off Cleveland.

“We’re not apologetic with this win,” said Philadelphia 76ers head coach Brett Brown. “If you want to compare resumes and accolades, take a look at my group.”

In the loss, Kevin Love had yet another stellar game for the Cavaliers, scoring 28 points to go along with a whopping 19 rebounds and two steals. With LeBron James, Kyrie Irving and Anderson Varejao inactive for the Cavs, rookie shooting guard Joe Harris managed to score a career-high 16 points in his first career start.

“I just think it felt like we didn’t have our firepower,” Love said. “I’ve been there before, but we should have been able to pull this one out if we just would have played better.”

76ers point guard Michael Carter-Williams took over the game down the stretch. Managing to exceed his stat line, Carter-Williams had 18 points, 13 assists and six rebounds in the victory over the Cavs. Five 76ers players managed to score in double figures. Outside of Love and Harris stepping up for Cleveland, Tristan Thompson had yet another solid start as he scored 18 points to go along with his nine rebounds, two assists and two steals.

Despite not taking a single shot or free throw for the 76ers, 23-year old power forward Furkan Aldemir came up clutch for the 76ers as he nabbed 10 rebounds to help Philadelphia maintain possession down the stretch.

Following the loss to the 76ers, the Cleveland Cavaliers (19-16) return home to face the Houston Rockets (23-10) at home on Wednesday, January 7 in a prime time game on ESPN. The game is slated to tip-off shortly after 7 pm ET. Just like how the Cavs have a hold on the fifth seed in the Eastern Conference, the Rockets currently have a grasp on the fifth seed in the extremely-competitive Western Conference.