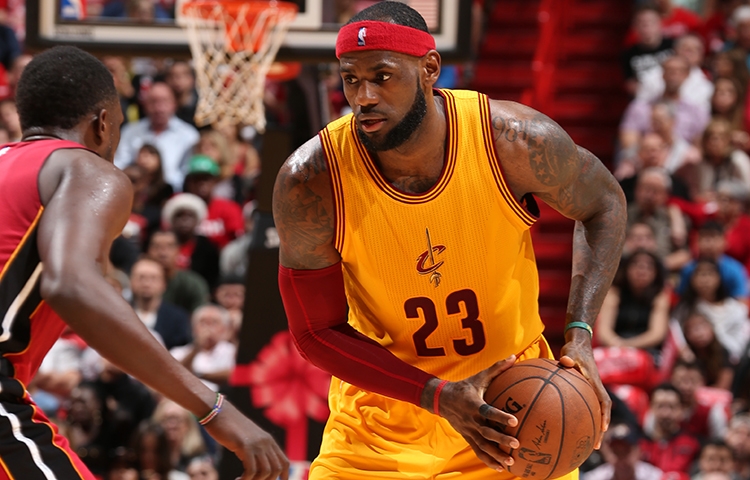 (Miami, FL) – Despite being down by as many as 17 points with 3:11 remaining in the first half, a late comeback attempt was not enough as the Miami Heat defeated the Cleveland Cavaliers 101-91 at American Airlines Arena on Christmas Day.

In his return to the city that won back-to-back championships with him, LeBron James was greeted warmly by Miami Heat fans. During the first quarter, a heartfelt tribute video to James was presented on the jumbotron to show the Heat’s appreciation to James for leading Miami to four straight NBA Finals appearances.

“I’ve got a lot of memories and a lot of friendships built over four years, my emotions are really good,” said James on his return to Miami. “My only job right now is us trying to get better. We’ve got a young group and we have to continue to improve.”

Taking his talents back down to South Beach for Christmas, James dropped 30 points on his former club to go along with eight assists and four rebounds. However, he struggled from the free throw line by shooting only 10 of 18.

Unfortunately, Heat center Chris Bosh was unable to play in this game against James and the Cavs due to a strained calf, which has caused him to miss seven games in a row. Bosh was a pivotal part of the Miami Heat Big Three’s success in winning back-to-back titles during the 2011-2012 and 2012-2013 seasons.

After being down 62-49 to the Heat at halftime, the Cavs rallied to within a three-point deficit as the third quarter ended, 77-74, in favor of Miami. With 11:19 remaining in the fourth, the Cavs took their first lead — since being up 2-0 in the first quarter — when James threw down a dunk to put Cleveland ahead 78-77. However, James was quickly given a technical foul as he hung on the rim for a short period of time.

After the technical foul, Wade sunk the free throw to tie the game again. From that point on, Miami never looked back as they outscored the Cavs 23-13.

Although the team lost, the Cavaliers got another very productive night on offense from Kyrie Irving. The star point guard had 25 points on 10 of 19 shooting accompanied by four rebounds and three assists. Kevin Love added 14 points and five rebounds for Cleveland.

In the aftermath of losing starting center Anderson Varejao for the season to a torn Achilles suffered Wednesday night in Cleveland’s 125-104 victory over the Minnesota Timberwolves, the Cavs needed someone to step up. Tristan Thompson played a bigger role in Varejao’s absence, scoring six points and grabbing nine rebounds in 26 minutes on the court.

“It’s a little tough to talk about the impact of not having him because this is the first game that we don’t,” Cleveland Cavaliers head coach David Blatt said. “But I will say that obviously, we’re going to miss Andy. He’s a big part of our team as a player, as a personality. That’s part of the sport and part of basketball certainly. You have to deal with injuries and with guys going down.”

On the night, Irving and James both suffered non-serious injuries but were able to return to the game. Irving had a left knee contusion, while James left to go to the locker room during the third quarter due to leg tightness. Luckily, he returned to the game shortly afterwards.

The Cavaliers (17-11) will look to bounce back from tonight’s loss as they travel north to take on the Orlando Magic (11-20) at Amway Center in Orlando, FL. The game is scheduled to tip off shortly after 7:00 pm ET.