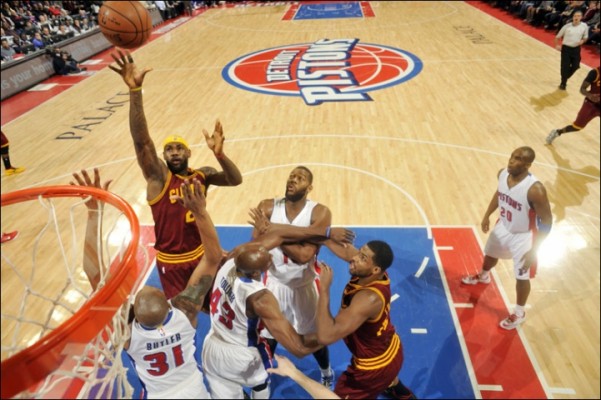 (Detroit, MI) – With an eye on a 17th victory in the span of 19 games, the red-hot Cleveland Cavaliers (35-22) travel to The Palace of Auburn Hills to take on the Detroit Pistons on Tuesday night, with the tip-off scheduled for shortly after 7:30 pm ET.

During this impressive stretch of basketball, the Cavs continue to play as a tightly-knit group of teammates that embrace head coach David Blatt‘s system and philosophy. J.R. Smith, who was acquired from the New York Knicks back on January 5th, is a prime example of the Cavs’ turnaround.

“You can’t force him to do what he doesn’t want to do,” said coach Blatt on Smith. “He is a rebel by nature, and you don’t get a rebel to do what’s needed, by force and enforce. You better help him to review his own values system rather than protest against yours. This can only be achieved by giving J.R. the personal freedom to do what he thinks is right inside and outside the court, while being accountable for his actions in front of his teammates and friends.”

Smith and Iman Shumpert, who accompanied him in the trade to Cleveland, showed the Big Apple how they’ve been thriving on their new team during Sunday afternoon’s 101-83 stomping of the Knicks. On one play alone, the duo got the crowd at Madison Square Garden abuzz with excitement.

“He’s one of the main reasons for our turnaround, together with Iman, who simply started later because of the injury,” said Blatt on the pair. “Those guys, honestly, they’ve been a godsend. They really have. They turned the team around.”

In the final contest of a four-game road trip, the Cavs can’t afford to look past the Pistons in regards to Thursday night’s highly anticipated showdown with the Golden State Warriors at Quicken Loans Arena. The Pistons, who have won six of their last nine games, are no slouch and are in the midst of a scramble for the last two playoff seeds in the Eastern Conference.

“Every game presents different challenges, and I think at this point with our roster we can play whatever the game presents itself,” said LeBron James after shootaround Tuesday morning. “We want to play uptempo because we have the athletes and we have the speed. We don’t want to face a half court defense every night, but if the game gets to a possession game like it will get to in April, I think we’re capable of executing and making plays happen.”

The Pistons were active right before the trade deadline as they made moves to acquire point guard Reggie Jackson from the Oklahoma City Thunder and power forward Tayshaun Prince from the Boston Celtics.

Jackson averaged 12.8 points, 4.3 assists and four rebounds per game primarily off the bench for the Thunder and will make his second start for the Pistons tonight, so Kyrie Irving will be looked upon to play stout defense against him. Prince is now in his third stint with Detroit, where he was part of the Pistons’ team that went to six straight Eastern Conference Finals between the 2002-2003 and 2007-2008 seasons, which included an NBA championship during the second year.

Ranked as the fourth best team in the NBA in rebounding efficiency, expect Pistons power forward Greg Monroe (15.4 points and 10.4 rebounds per game) along with center Andre Drummond (12.8 points and 13 rebounds per game) to cause havoc in the paint for the Cavs. Kevin Love and Timofey Mozgov will have their hands full with this matchup, so it’s very important they keep the Pistons big men from attacking the glass and getting second-chance points for Detroit.

Pistons shooting guard Kentavious Caldwell-Pope posted a huge game Sunday afternoon in Detroit’s 106-89 win over the Washington Wizards, as he scored 26 points (10 of 20 from the floor) that included six three pointers made. For the Cavs, there must also be a heavy amount of defensive prowess towards defending the perimeter. Since the likes of Caldwell-Pope, shooting guard Jodie Meeks and power forward Anthony Tolliver are sharp three-point shooters, the Cavs can’t afford to give Detroit many wide-open looks.