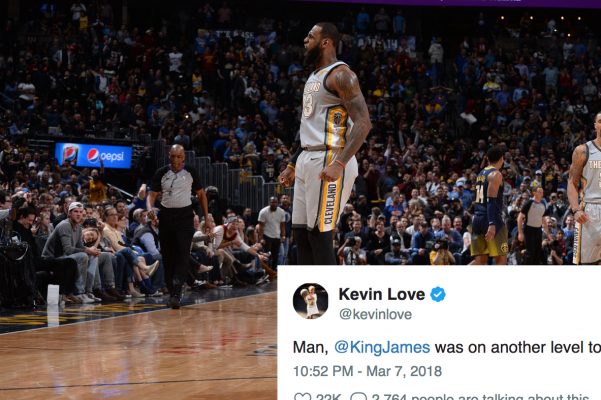 LeBron James reminded everyone why he’s one of the best to ever play the game of basketball in Thursday night’s victory over the Denver Nuggets. Not only did he post a monster stat line, he closed out the game with four straight shots and nine straight points to give the Cavs the win.

Some of James’ newer teammates seemed somewhat stunned at the sheer dominance that he was able to exert in crunch time. Longtime teammate Kevin Love was impressed as well, tweeting at James following the game to congratulate him on the night with one of James’ own trademarked “sheesh” tweets.

Man, @KingJames was on another level tonight!!! Sheesh.

James has often tweeted at fellow NBA players when they have performed well in games this season, using the word “sheesh” to express how impressed he has been. On Wednesday night, the “sheesh” directed at him was certainly earned.

James finished the night with 39 points, 10 assists, and eight rebounds in the game. While Love was not on the court with him — as he is still recovering from a fractured left hand — it seems he still very much enjoyed watching his teammate take over the game.

Recent reports have indicated that Love may be able to return to the court earlier than expected, but it is still likely that we will not see him back until late March. Hopefully, the next time James puts on a show like this, Love will be right there beside him.