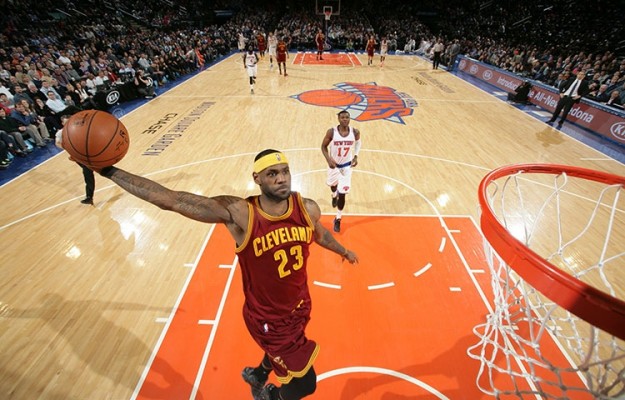 (New York, NY) – Dispelling any notions of a letdown after a big win on Friday night, the Cleveland Cavaliers had an easy time in the Big Apple on Sunday afternoon as they thrashed the New York Knicks, 101-83, before a disinterested Madison Square Garden crowd.

The win improves the Cavs’ record to 35-22 and gives them 16 wins in their last 18 games. In addition, it once again puts them within a half-game of the Chicago Bulls for the third seed in the Eastern Conference.

It didn’t take long for the Cavaliers to take control of the game, combining sizzling first quarter shooting with effective defense that limited the depleted New York squad to just 26 percent shooting. That sizzle saw Cleveland connect on 15 of their first 21 shots for a 71 percent rate.

A balanced scoring attack throughout the game saw four of the Cavs starters combine for 69 points. Leading the way was Kevin Love with another double-double on 16 points and 16 rebounds. The 16 boards allowed Love to reach a career milestone, breaking the 5,000-rebounds threshold.

After the game, Love described the atmosphere around the team by saying, “I think we’re playing hard and validating ourselves. Some of that doesn’t show up on the scoresheet.”

In postgame comments, Irving pointed out the team’s defensive effort, saying, “We made them take a lot of shots and everybody was just clicking. Our focus level is at an all-time high.”

Indicative of how barren the Knicks roster is, one of their starters on Sunday was Lou Amundson, who was part of the J.R. Smith–Iman Shumpert deal in early January. During his brief time with the Cavaliers, Amundson saw little time on the court, but in nearly 22 minutes on Sunday, he finished with 10 points and six rebounds.

In the very early going, the two teams saw a trio of brief deadlocks that the Cavs answered via a pair of layups and a three-pointer from Smith with just over two minutes gone to give Cleveland the lead for good at 9-6.

After a New York basket sliced the lead to one, the Cavaliers blew the game open with a 27-9 run the remainder of the quarter. The surge was an equal opportunity affair, with six different Cavs players adding to the scoreboard totals. James capped the flourish by hitting a three in the closing seconds to make it 36-17 after one quarter.

After two minutes of quarter two, Cleveland had boosted the lead to 23 at 40-17 before the Knicks ran off six unanswered points. However, any inklings of a comeback ended there as a 22-10 Cavaliers run gave them their biggest lead of the half at 62-33 after a Smith dunk with 45 seconds left.

New York would tally the final five points before intermission, but the 62-38 halftime deficit was a testament to their poor shooting and the Cavs’ defense. That shooting was non-existent from long range during the first 24 minutes, with the Knicks missing all nine three-point attempts, a continuation of what took place in the Cavaliers’ Friday win over the Wizards.

Cleveland head coach David Blatt talked about how the team thrived in the first half and avoided any hint of a hangover from the Friday victory, saying, “We really came out defensive-minded and took the game seriously.” Blatt added, “We have specific goals in mind, and we have to play the game in front of us.”

Blatt also gave credit to the trio of newcomers (Smith, Shumpert and Timofey Mozgov) for helping stabilize the team’s lineup. “The three of them have really changed the fortunes of the team.”

Virtually all of the second half could be classified as garbage time, with New York getting no closer than 16 for the rest of the game. That run by the Knicks came late in the fourth quarter, with Cavalier starters long gone.

While the Cleveland shooting slowly cooled off to just under 51 percent, the team’s defense kept up the heat on New York, holding them to 37 percent from the field and just three of 19 from long range.

The return of Smith and Shumpert to New York was one of the story lines entering the game, with Smith making a point to emphasize the contrasts between the two teams. “Going from a team that’s trying to win to a team that expects to win, our total approach is different,” said Smith.

Irving mentioned the need to maintain that current approach, saying, “We want to come into each game and watch enough film to be prepared.”

One benefit of coasting to this victory was that none of the Cavs’ starting five spent more 29 minutes on the court, which should keep their legs fresh for their next outing, which comes on Tuesday night on the road against the Detroit Pistons. That contest will have a 7:30 pm ET tip-off.