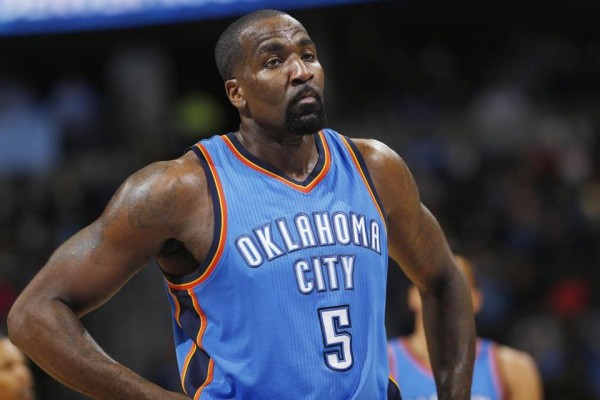 The conclusion of the NBA trade deadline on Thursday afternoon saw the Cleveland Cavaliers come up empty-handed in dealing for additional bench strength, but the wave of buyouts that are expected to take place over the next week could put some interesting talent into the mix.

One of those talents could be veteran forward Kendrick Perkins, who was traded from the Oklahoma City Thunder — shortly before the deadline — to the Utah Jazz in a three-team deal that also included the Detroit Pistons. Yahoo Sports’ Adrian Wojnarowski tweeted that the Cavaliers are one of the teams looking to add him.

The Cavaliers and Clippers are strong contenders to sign Kendrick Perkins once buyout is done with Jazz, league sources tell Yahoo.

Though the Jazz have acquired the 6’10” Perkins, they’re expected to buy him out, which puts him in the crosshairs of Cavaliers General Manager David Griffin. The team needs additional depth up front, and Perkins does have plenty of playoff experience, including two trips to the NBA Finals.

In addition, his physical play at center can help spell Timofey Mozgov for at least a short period of time, and allow Tristan Thompson to focus on his play at power forward.

In the past two seasons, he’s primarily been a starter, but has actually averaged less than two quarters’ worth of action. This year, he’s only averaging four points, five rebounds and under one block per game.

The Cavs’ main rivals figure to be the Los Angeles Clippers, who are also looking to make a deep playoff run in the near future. They do have an ace in the hole that Cleveland can’t match: Perkins played under current Clippers coach Doc Rivers when the two were with the Boston Celtics, and both were part of the team’s 2007-08 squad that captured the NBA crown.

One other team mentioned was the Chicago Bulls, but that seems unlikely for chemistry reasons. Perkins and Joakim Noah have had issues in the past, and with head coach Tom Thibodeau already at odds with management, the Bulls aren’t likely to magnify the volatility surrounding the team.