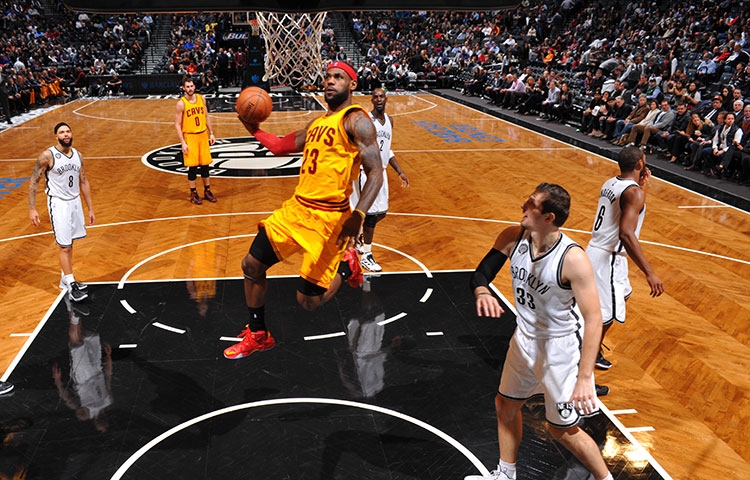 (Brooklyn, NY) — For the second consecutive game, the Cleveland Cavaliers put together a strong third quarter run by outscoring the Brooklyn Nets 25-6 on the way to a 110-88 victory in Monday night action at the Barclays Center.

The win was Cleveland’s seventh in a row, improving their mark to 12-7 on the year and completing a three-game sweep of their road trip that began with wins over the New York Knicks and Toronto Raptors last week.

When the two teams came back from the halftime break with the Cavaliers holding a 50-49 lead, LeBron James served as the entire offense in the early going, scoring the first nine points. The last of those points came with 9:18 remaining and gave the Cavaliers a 59-53 lead.

Brooklyn then battled back, scoring eight of the next nine points to take a 61-60 lead with just under eight minutes left in the quarter. From that point, the Cavs started their surge, with the team holding the Nets to just a single basket in more than three minutes of action in the final 5:19 of the stanza.

Keeping their foot on the gas pedal, Cleveland would move the lead to 26 on two occasions in the final quarter, the last time on a pair of Anderson Varejao free throws with 6:05 left that made it 102-76.

Cavs Head Coach David Blatt said about the second half improvement, “We didn’t have an easy time in the first half, and caught ourself at halftime.” Blatt also said, “We had to commit to winning this game,” saying that the team had very little defensive intensity in the first two quarters.

The Nets were able to whittle the lead down to as low as 18 in garbage time, and made a few attempts at chipping away even further, but the game itself had long since been decided.

Leading the scoring parade was Dion Waiters with 26, one of five Cavaliers to score in double figures. The third-year guard may have been inspired from reports earlier in the day that he could be part of a deal involving the Memphis Grizzlies.

In the postgame comments, Waiters said about his early shooting struggles, “I didn’t let a couple of misses discourage me,” and said about the team as a whole, “We were just clicking on all cylinders.”

Waiters’ effort also led the bench scoring, which has been a sore spot this season, but produced 59 points in this contest, compared to 42 for Brooklyn. Blatt said about the bench’s effort, “When we get that type of bench contribution, we’re going to be tough to beat.”

Cleveland also dominated the boards, with a commanding 55-33 advantage in that department, including grabbing 20 of 30 on the offensive side. Three players finished in double figures in that category—Varejao with 14, Kevin Love with 14 and Tristan Thompson with 12—with Love and Thompson also collecting double-doubles on the night.

After the game, Love said, “The defense dictated the offensive end,” but that, “We have to have a short memory.” That’s because the team will be facing Toronto at home tomorrow night.

In the opening quarter, the Nets scored 25 points, while Love and James scored 22 between them for the Cavs, who ended the quarter with a three-point deficit. The game began with another slow start that saw the Cavaliers fall behind 10-4 before James hit a three-pointer.

However, the Nets answered with six unanswered points for a 16-7 advantage. After the two teams traded baskets, the Cavs began to inch closer for the rest of the quarter, with Love finishing with 15 in the first 12 minutes.

In the second quarter, it was the Cavalier duo of Waiters and veteran James Jones who injected some second quarter life into Cleveland. Waiters notched 13 during the quarter, while Jones nailed a trio of three-pointers.

The two teams traded leads throughout the second quarter and were also deadlocked on four different occasions. After Waiters tallied a three with 4:10 to go before the break to give the Cavs a 46-43 lead, they managed only four more points before intermission, all coming from Thompson—on a layup and two free throws.

Kyrie Irving was held scoreless until midway through the third quarter, when he hit three free throws after being fouled in the right corner. Irving wasn’t terribly concerned about his seven-point effort, saying the image of James, Love and him serving as the main scorers in every game was a false one. “We kind of threw that ‘Big Three’ notion out the window,” said Irving.

The game saw the welcome return of reserve guard Matthew Dellavedova, who had missed more than a month due to a knee injury. The rust from being away from the court for so long was clearly evident in the first half, when he missed both his shots from the field. One of those misses was an embarrassing three-point airball attempt in the first quarter. The Australian native finished with two points and three assists.

James, who finished with 18, said about the approach of the team, “We had a bunker mentality going into this road trip and we took care of business.” James added that the team was at an even keel, saying that, “It’s too long a season to get too high or too low.”

Blatt also joked about the fact that when royal couple Prince William and Duchess Kate arrived at the game the score was tied at 61—right before the Cavs blew the game open. “We’ll have to bring them to every game,” said Blatt.

As noted, the Cavaliers return home tomorrow night for their third battle with the Raptors in a 7 pm ET game, having vanquished the Eastern Conference’s leading team last Friday in a 105-91 victory. That helped avenge a 110-93 defeat on November 22 at the hands of the Raptors that saw the Cavs blow a big early advantage.