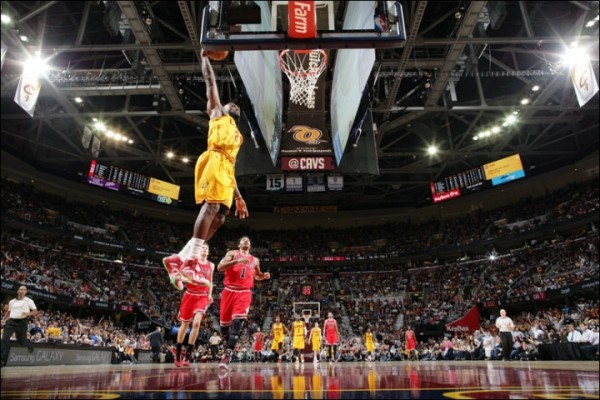 (Cleveland, OH) – Holding off what would have been a disastrous collapse, the Cleveland Cavaliers won Game 5 of the Eastern Conference semifinals against the Chicago Bulls, 106-101 at Quicken Loans Arena on Tuesday night. The victory put them just one game away from winning the series.

The Cavs were paced by LeBron James’ 38 points, 12 rebounds and six assists with no turnovers. In addition, Kyrie Irving, whose health has been delicate during this series, connected for 25 points and hit four clutch free throws in the final 16 seconds. Also contributing was Tristan Thompson, who added a double-double with 12 points with 10 rebounds.

James was happy about having no turnovers, saying, “It’s the first stat I look at after the game. That’s a huge stat.” He also spoke of the contrast in the team’s potential growth in winning an important playoff game, saying, “I think we grew some tonight, but we didn’t grow too much. We gave up 30 points in the fourth quarter adn that’s unacceptable.”

Irving spoke of his performance, saying, “My teammates want me out there. It’s too late now, I have to be out there.”

Chicago charged back from 17 down earlier in the fourth quarter and got within two points with just 1:18 left, fueled by a 26-11 surge. Then, after a miss by the Cavaliers, the Bulls had two tries to either tie the game or take the lead. In the latter case, Jimmy Butler’s shot from the corner was off with 45.9 seconds left.

Following a miss by James with 22.9 seconds left, three different Cavaliers slapped the ball out to Irving, who was then fouled, which helped solidify the win.

After the game, Cavs head coach David Blatt talked about the fourth quarter struggles, saying, “If you’re not locked in and maintaining the same level of consistency, the other team will take advantage.”

Blatt did praise the performance of James, saying, “LeBron was just outstanding at every level of the game,” and also talked about the gritty effort of Irving. “He felt better, he had more lift and a little more energy.”

With just 90 seconds gone in that final quarter, a near-brawl erupted after a Chicago basket made it 83-73 in favor of the Cavaliers. Just after the basket, Cleveland’s Matthew Dellavedova and the Bulls’ Taj Gibson became entangled in a scuffle that soon involved other members from both teams.

Gibson was ejected for kicking Dellavedova, which allowed the Cavs to run off seven straight points and seemed to give them a big enough cushion for the remainder of the contest.

Afterwards, Gibson denied kicking Dellavedova, who said he didn’t see the play. However, J.R. Smith, who came close to getting involved in the altercation said, “It was a dirty play. I know some things about dirty plays. Just one of those things you don’t do.”

Smith spoke of how the controversy gave Cleveland a brief jolt, saying, “It pumped us up, but we got lackadaisical and let them back in the game.”

James mentioned that his main role was to keep teammates on the bench in order to avoid any suspensions. He mentioned how, “Delly doesn’t bother anyone. He doesn’t even bother himself.”

Early on, the Cavaliers appeared to be in danger of another Game 1 performance after falling behind 18-8 midway through the first quarter as the Bulls scored the first eight points of the game.

However, after another Chicago basket, the Cavaliers battled back, first getting within four at 18-14, then completing a 17-6 run to close out the quarter. They key blows in this stretch were a trio of threes from Smith, Iman Shumpert and Irving, the latter one giving the Cavs a 25-24 lead as the horn sounded.

Blatt discussed the comeback by noting, “Once we started rebounding the ball better, we began to play with pace.”

One the defensive side, the Cavaliers didn’t seem to have an answer for Rose in the first quarter, with the guard tallying half of his team’s points in the opening period.

When the second quarter began, it was the Bulls who didn’t have an answer for James, who scored the Cavs’ first 12 points and finished with 16 for the quarter. The Windy City offense also tanked again, going more than five minutes without a field goal. During the first half, they also failed to connect on any of their eight three-point attempts, and hit on only four of 22 outside shots in the second period.

Only a minute after James’ last basket in that 12-point run, the Cavaliers’ advantage reached 10 points on a driving dunk by Smith. For the most part, the Cavaliers were able to maintain that margin until halftime arrived with the Cavs holding a 54-44 lead.

Once the game resumed, Chicago’s effort mirrored the effort at the start of the game as they scored the first eight points to chop the margin to just two points. They then had the opportunity to take the lead back, but a miss began a 17-6 Cleveland run that gave the Cavaliers an 80-68 lead in the final seconds of the third quarter.

Chicago was able to whittle three points off that deficit when Nikola Mirotic hit a buzzer-beating shot from just beyond the half-court line to make it 80-71. That led to what became a schizophrenic final quarter for both teams.

Blatt talked about the Cavs’ improved shooting by saying, “Some of the shots we were missing in previous games, we knocked down a lot of those tonight.”

Irving spoke of the challenge of trying to close out the series in Chicago on Thursday night, “It’s going to be tough. We have to go in there with the mentality of a killer.”

Tipoff for what the Cavaliers hope will be the final game of the series will be at 8 p.m. for the nationally televised clash that can be seen on ESPN.