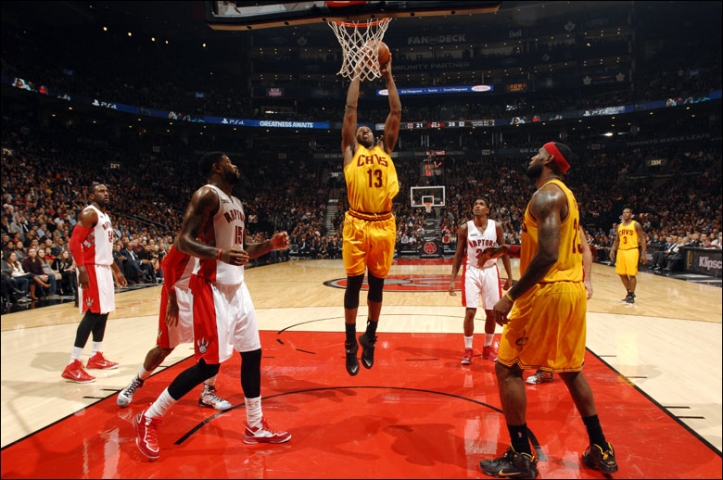 (Toronto, ONT) – A 19-4 third quarter run by the Cleveland Cavaliers turned their only deficit of the night into a 14-point lead as they went on to defeat the Atlantic Division-leading Toronto Raptors, 105-91, at the Air Canada Centre on Friday night.

The win marked the sixth straight victory for the Cavs, who gained a measure of revenge for the second straight night. It was 13 nights ago that the Raptors sent Cleveland reeling by coming back from a 24-6 deficit to win 110-93.

For the first 28 minutes plus of the game, the Cavaliers held the upper hand. However, after Kyrie Irving’s layup with 11:02 left in the third quarter made it 53-46, the Raptors went on a 12-4 run to briefly take a 58-57 lead on Kyle Lowry’s three-pointer with 7:14 remaining.

Another Irving layup began the game-changing run 16 seconds later, with another layup and three during the surge. Also contributing was LeBron James, who connected on a pair of threes along the way, the last with 1:38 left in the third to make it 76-62. Lou Williams’ jumper served as the final basket of the quarter to make it 76-64 entering the final 12 minutes.

With Toronto scoring the first five points of the fourth quarter, they had momentum, and appeared in position to reduce the deficit even further after Tristan Thompson’s layup was blocked. However, the Raptors were whistled for goaltending and they never got closer than six the rest of the way.

Thompson, playing in his hometown, provided much of the fourth quarter power with 15 points and seven rebounds in the period. His two free throws with 4:40 left provided the final push that put the game away as Cleveland put together a 14-4 run.

After the game, Thompson noted the continued improvement in the team’s defense, saying, “We just have to continue getting multiple stops.”

Veteran Shawn Marion concurred with that thought by succinctly saying, “Offense wins games, but defense wins championships,” while Irving added, “It (defense) has to become part of our identity. We have to do it for 48 minutes.”

One indication of the team’s defensive improvement could immediately be seen through the scoring of Toronto’s Williams: on November 22, he scored 36 points against the Cavs; in this game, he tallied only five.

Cavaliers Head Coach David Blatt was effusive in his praise of Thompson, saying, “He played exceptional on both ends of the court. We needed to have someone come in and carry the load for us,” referencing the team’s limited bench and the quick turnaround after playing on Thursday night.

Blatt also noted the hometown angle with regard to Thompson, saying, “I have to imagine it was special for him.”

Much like their first meeting, the Cavaliers jumped out to an early lead, holding the advantage for the entire quarter. After notching the first two baskets of the game, the Cavs made it 7-2 before the Raptors sliced the margin to one with 9:09 remaining.

Cleveland ran off six straight points as part of an 11-4 run, giving them an 18-10 lead after Marion’s three from the left corner with 5:40 left.

Toronto would get as close as three at 18-15 on a jumper with 3:54 to play in the opening quarter, but the Cavaliers slowly inched the lead back up again. In the final minute of action, Kevin Love hit his third three-pointer of the stanza to make 28-21, and Thompson closed things out on a dunk with 2.8 seconds left to play for a 30-21 lead.

After Williams connected on a three for the Raptors for the first basket of the second quarter, a pair of Cleveland reserves took just over a minute to move the lead up to 14 at 38-24. Dion Waiters scored on a layup and was followed by a pair of threes from veteran James Jones, who has seen limited time thus far.

Anderson Varejao hit a jumper with 7:38 left before the break to give the Cavaliers a 42-29 lead. However, for more than four minutes, the scoreboard didn’t change on the Cavs’ side, while Toronto ran off eight unanswered points.

With just under a minute to go before halftime, James slammed home a basket to make it 51-42. Lowry then chipped away at the Raptors’ deficit on a pair of free throws with 1.1 seconds remaining, making the halftime score 51-44 in favor of Cleveland.

Reaching the century mark once again proved to be a winner for the Cavs, who now have a 10-1 record on the year when they score more than 100 points.

James senses the squad’s confidence building, saying, “I feel good where I am, but I feel better where we are as a team.”

Blatt mentioned that despite not having a shootaround this morning, “[The Cavs] had a good film session and walk-thru, and [they] came to play.”

The Cavs will be off until Monday night when they travel once again to New York, this time to face the Brooklyn Nets in a game set to tip off shortly after 7 pm ET.