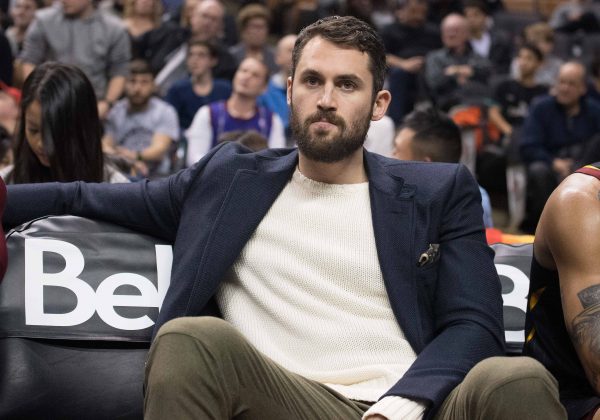 One of the constants during Cleveland Cavaliers forward Kevin Love’s time with the Cavs has been the presence of trade rumors. Even though he’s now being mentioned in some trade speculation, Love indicated on Monday that he wants to stay with the Cavaliers, while also acknowledging the realities of NBA life.

Love wants to be here, understands his name will surface in trade speculation.#Cavs pic.twitter.com/Ynk0Vmy9Vw

“I’ve wanted to be here, and I’ve said this too, it’s a business,” Love said. “We saw that last year at the deadline. I’ve never seen so many guys traded from a team really ever, and I’ve seen, playing six years in Minnesota and now this will be my fifth year here, I’ve seen a lot of stuff. So I think every trade deadline, every draft, every free agency, always brings something new. It’s always different, so, you know I would love to be here, I would just love to get through a whole season healthy just because I’ve had little nagging things that have taken time. I’ve been a little bit unlucky, but I’d like to play ball here.”

The 30-year-old Love has been out since October because of a left toe injury that developed during training camp, which kept him out of the Cavaliers’ preseason contests. He then played in each of the first four games of the regular season, averaging 19.0 points and 13.5 rebounds per game. However, his shooting touch was affected by the injury, with the veteran hitting on just 32.3 percent of his shots from the field and just 29.2 percent of his 3-point attempts.

Love underwent surgery on his injured toe on Nov. 2, with a subsequent time frame for his return indicating that he’d be back in January. One recent report hinted that he might return during the Cavaliers’ upcoming six-game road trip, but no official word has been offered.