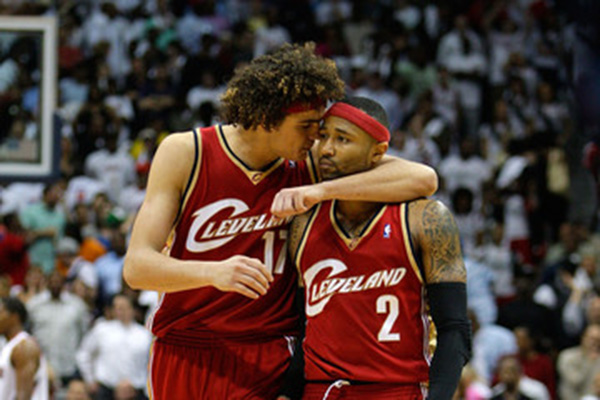 It’s early on in training camp, but it appears we are getting our first glimpse on what could potentially be the starting lineup for opening night.

According to Terry Pluto of The Plain Dealer, the Cleveland Cavaliers have been featuring a starting lineup that has Anderson Varejao at power forward, Mo Williams at point guard and J.R. Smith at shooting guard.

With Iman Shumpert sidelined for at least three months due to wrist surgery, Kyrie Irving out indefinitely after knee surgery and Kevin Love’s return still uncertain as he recovers from offseason shoulder surgery, the Cavaliers have made adjustments to their starting five.

All three aforementioned players have started for Cleveland in the past. Varejao was the starting center during the beginning of last season before suffering a season-ending Achilles’ injury. Williams started for the franchise during his two-and-a-half season tenure with the Cavaliers from 2008 through 2011, and Smith started at shooting guard for 45 games during the second half of last season.

In regards to Love’s progress in his return from injury, Pluto states that the 27-year-old forward has been participating in one-on-one drills lately:

“Kevin Love is doing more than the Cavs expected. He is taking part in 1-on-1 contact drills, especially working on his low-post moves. Love is recovering from shoulder surgery, so he is not yet scrimmaging.”

While Love is making strides in his recovery, Irving is still being held out of all drills, according to Pluto:

“The Cavs are going very slowly with Kyrie Irving as he recovers from his fractured knee cap. He is not taking part in any drills. That means Mo Williams is the starting point guard right now, and that could even be the case on opening night.”

Though the Cavaliers are considered the favorites to win the NBA Finals in 2016, they are certainly facing their share of adversity due to the numerous injuries the team has suffered prior to the start of the 2015-16 season.