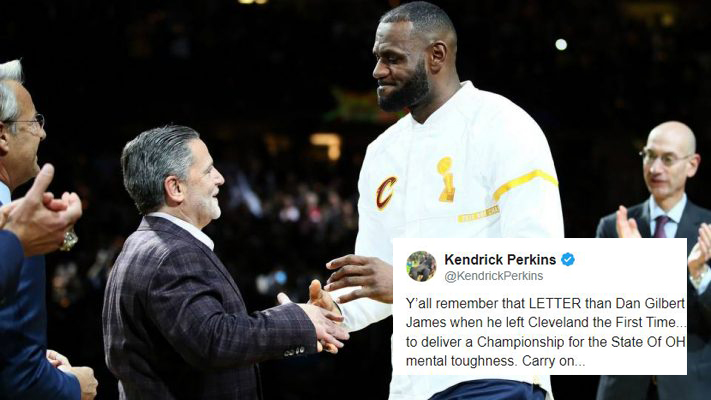 While some sports pundits don’t consider Los Angeles superstar LeBron James to have a ton of mental toughness, one of his former teammates pointed out an interesting fact.

Former Cleveland Cavaliers center Kendrick Perkins pointed to how James delivered a championship to the franchise despite team owner Dan Gilbert chastising him for leaving in 2010.

Y’all remember that LETTER than Dan Gilbert wrote about LeBron James when he left Cleveland the First Time…Bron still came back to deliver a Championship for the State Of OHIO‼️ Talking about mental toughness. Carry on…

James, 35, acquired plenty of hate and criticism for departing the Cavs for the Miami Heat in 2010.

The hometown hero announced his decision to leave Cleveland on national television. In addition to joining superstars Dwyane Wade and Chris Bosh, the four-time MVP declared the Heat were going to win numerous championships.

Understandably, Cavs fans were irate. However, Gilbert took it to another level by launching a public diatribe at James.

The Cavs owner absolutely besmirched James’ character and stardom. Furthermore, the billionaire proclaimed the Cavs were going to win a championship before the All-Star did.

The ensuing four years proved that Gilbert wasn’t prophetic. While Gilbert’s Cavs became one of the worst teams in the association, James’ Heat won two championships in four tries.

Yet, James came back to the Cavs in 2014 in order to bring his state a championship. Despite the onerous challenge, he delivered on his promise in 2016.

The veteran led the Cavs back from a 3-1 deficit against the Golden State Warriors in the 2016 NBA Finals to give Cleveland its first championship in franchise history.