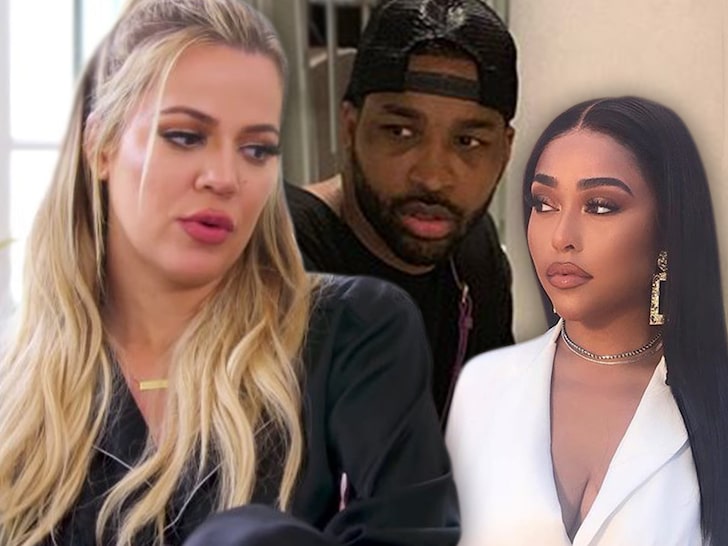 The tumultuous relationship between Cleveland Cavaliers center Tristan Thompson and reality television personality Khloe Kardashian was rocked earlier this year by reports that Thompson had cheated on her with model Jordyn Woods.

Kardashian indicated that after Thompson had admitted the indiscretion, he allegedly threatened to commit suicide.

TMZ pointed to a discussion between Kardashian and the father of her sister Kourtney’s three children, Scott Disick, on last Sunday’s episode of the reality show, “Keeping Up with the Kardashians”:

“On Sunday’s episode of ‘Keeping Up with the Kardashians,’ Khloe was telling Scott Disick about Tristan’s text messages to her after she confronted him about his fling with Woods.

“She says she got her questions answered, but then her baby daddy (Thompson) bombarded her with messages of regret and sorrow … including threatening suicide.

“Khloe told Disick … ‘He’s like, ‘I can’t stop thinking about you and what a mess I have caused.’ She added, ‘He’s doing this to get a reaction out of me. Oh, so I’m just allowed to say ‘I’m going to kill myself’ at any time? That’s crazy.’

“Despite her disgust over Tristan’s behavior, Khloe apparently asked his friend to check on him to make sure he was okay … which Disick said ‘just goes to show that Khloe is an unbelievable person that loves so hard and so much.’

“Scott added … ‘Somehow she just keeps getting the short end of the stick, and it’s unfair and it’s hurtful and it’s really hard to me to sit and watch.'”

Thompson and Kardashian began their relationship in 2016 after the Cavaliers won the NBA title. In 2018, Thompson was caught on video cheating on her while she was pregnant. Soon after, Kardashian gave birth to their daughter, True, with the relationship getting back on track until this latest incident.

Besides Thompson’s off-the-court problems, he’s hoping to bounce back with his game. Once one of the most durable players in the NBA, he’s been limited to just 96 regular season games over the past two seasons because of injuries. In his 43 games during the 2018-19 campaign, he averaged 10.9 points, 10.2 rebounds and 2.0 assists.

A comeback year is especially important for the veteran, since he’s in the final year of the five-year, $82 million contract he signed in 2015. He’s scheduled to make $18.5 million and may not get similar offers if he continues to have injury issues. The Cavaliers could deal him to a contending team prior to February’s trade deadline if contract negotiations go nowhere.