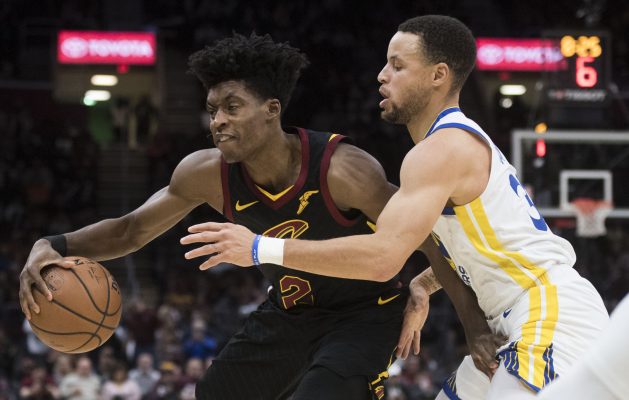 Cleveland Cavaliers rookie point guard Collin Sexton found out what it meant to face off against defending champion and former MVP Stephen Curry on Tuesday night, and it seems the experience had quite an impact.

Following the Cavs’ 129-105 defeat at the hands of the Golden State Warriors, Sexton spoke to reporters about what he learned from sharing the court with Curry.

Collin Sexton reflects on facing Steph Curry for the first time amidst the @cavs' recent string of elite opposition.#BeTheFight pic.twitter.com/7mjNzY8yNI

“Those teams right there are championship teams,” he said, referring to the teams the Cavs have played over the last couple weeks. “I feel like us competing against them will us get to the next game just so we can improve and watch film. Those teams are building blocks of where we want to be in the future.”

“It just makes me want to go out there and compete and try to get the victory,” he said about facing the Warriors for the first time. “Whatever my teammates need me to do, on defense and offense, to get the win.”

After a somewhat slow start to his rookie campaign, Sexton has recently looked like a top-10 draft pick and then some as of late. He is currently averaging 14.8 points, 3.2 rebounds, and 2.5 assists per game. He also recorded his first career double-double last week against the Oklahoma City Thunder, when he finished the night with 21 points, 10 rebounds, and three assists.

It seems clear that Sexton is not only learning from the best, but starting to try to compete with the best.

If the early stages of Sexton’s rookie season are any indication, it may not be long before future rookies are answering questions about what it’s like to face off against him.