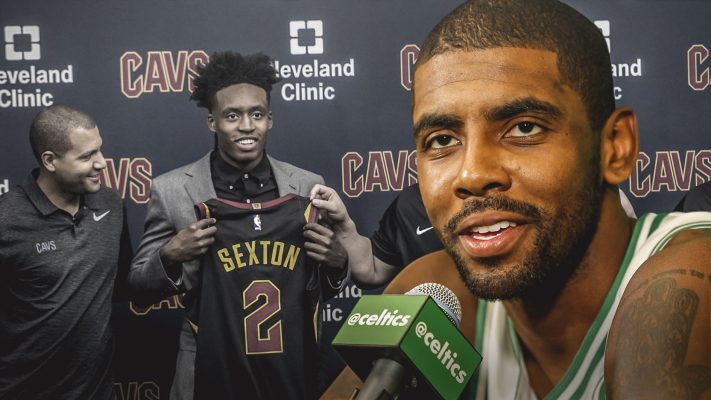 Cleveland Cavaliers point guard Collin Sexton got his first opportunity to face one of his predecessors when the Cavaliers played Kyrie Irving and the Boston Celtics on Friday night. Judging from Irving’s postgame comments, he likes the makeup of the 19-year-old rookie.

The mood of Irving was no doubt upbeat because he finished the Celtics’ 128-95 rout of the Cavs by scoring 29 points, grabbing four rebounds and handing out four assists. A total of 13 points came during the first quarter, with the veteran sitting out the final period.

Joe Vardon of The Athletic noted that Irving has been aware of Sexton for some time:

“Irving said he’s been a fan of Sexton’s since high school, and he had nice things to say about the Cavs rookie. He said Sexton is ‘a really good player,’ ‘very talented,’ and ‘head of the franchise now, along with Tristan (Thompson) and Kevin Love.’

“‘Obviously I’ve been doing a little studying as well and just waiting for that moment to play against a young guy like that,’ Irving acknowledged.”

Despite having little trouble when matched up against Sexton, who finished with 15 points, four rebounds and four assists, Irving said he admired the rookie’s competitive approach during the first quarter:

“I mean, coming out in the first quarter, shooting as many shots as he did and trying to prove a point against me, I loved it. Obviously some very makeable shots that could’ve gone in easily, and I think he probably would’ve been in a different rhythm.”

Irving served as point guard for the Cavaliers for six seasons until being dealt to Boston in 2017. Sexton is now seen as one of the cornerstones in the rebuilding of the Cavaliers’ franchise, a status that Irving knows well after being the top overall pick in the 2011 draft. Irving feels that Sexton has the ability to develop into the All-Star performer that Irving’s become:

“I always like those guys that build their own identities, just like I have. It’s based on how consistent they are, so I think if (Sexton) figures that out — every single night you’re going to be demanded to, if you’re going to be a 20-point scorer one night on a Wednesday, then you’re going to be asked to do it on a Friday as well. It’s a challenge that I think he’s more than willing to take and he’s up for it. He’s talented enough to do it.”

Sexton will have three more opportunities to battle Irving, with the next chance coming on Jan. 23 in Boston. That’s followed by two matchups in Cleveland.