Paul George: Some People Have a Hard Time Playing With LeBron James 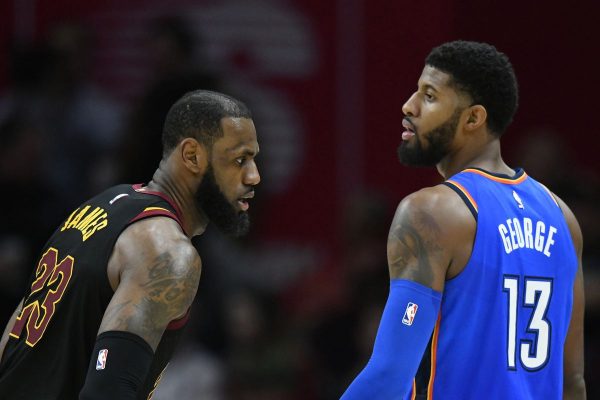 Oklahoma City Thunder star Paul George believe that certain players in the NBA may not be great fits next to LeBron James on the basketball court. George commented on what it’s like to play alongside James in the midst of many saying that it’s difficult to play with Russell Westbrook.

“You could say that about a lot of guys,” George said. “LeBron is the best player in our league, but some people have a hard time playing with him. One thing you can’t say about Russ is that he’s not ready or he’s not prepared. That’s him every night.”

This isn’t the first time that a star player has not wanted to play alongside James. Former Cleveland Cavaliers point guard Kyrie Irving explained that it was really tough to play with James due to all the additional media attention and added pressure to win a championship each year.

Shams Charania of The Athletic added earlier this past summer that Kawhi Leonard, before his trade to the Toronto Raptors, wasn’t exactly “jumping for joy” at the thought of teaming up with James in Los Angeles.

Furthermore, per Adrian Wojnarowski of ESPN, Minnesota Timberwolves disgruntled star Jimmy Butler “had once imagined playing for the Lakers, but LeBron James’ arrival as the franchise’s cornerstone made it less appealing for Butler in the prime of his career.”

Despite all this reported resistance from stars, James has still managed to win three NBA titles, make it to eight straight Finals, and instantly transform any team he’s on into a playoff team and contender.