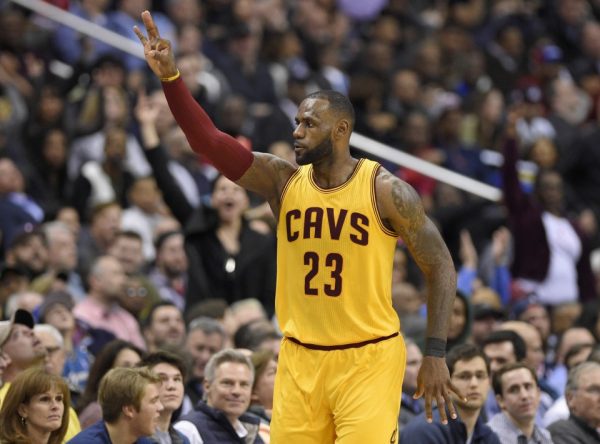 (Washington, DC) – Kyrie Irving scored 11 of his 23 points in overtime while the duo of Kevin Love and LeBron James combined for 71 points to help the Cleveland Cavaliers emerge with a hard-fought, 140-135 overtime victory over the Washington Wizards at Verizon Center on Monday night.

Love finished the game with a team-high 39 points and 12 rebounds, but without the regulation heroics of James and the overtime outburst by Irving, the Cavaliers would have gone down to defeat.

“This gives us a lot of confidence. It was just a game that had big play after big play,” Love said. “We knew they were going to bring it, but we grew up a bit tonight.”

James, who finished with 32 points and a career-high 17 assists, had shockingly missed an easy layup with 4.9 seconds left in the fourth quarter, with Wizards guard John Wall then converting two free throws to make it 120-117 in his team’s favor. Despite Cleveland taking the ball out of bounds from the other end of the court, Love was able to connect with James who banked in a fadeaway 3-pointer with 0.3 seconds left.

“He wasn’t quite in the right spot, but it was good enough,” Cavaliers head coach Tyronn Lue said about James’ shot. “It was a hell of a pass.”

Speaking of that shot, James was almost casual in his description of it:

“It’s just a play we work on all the time during practice,” James said. “I trusted my shot and it went in.”

However, James fouled out less than a minute into overtime, which resulted in Irving coming to life after a quiet effort during regulation. His 11 points during the extra session were highlighted by a 3-pointer with 35 seconds left that gave Cleveland the lead for good. The shot was virtually identical to his iconic shot in Game 7 of last year’s finals.

“We don’t want him (James) to go to the bench,” Irving said. “But we’ve got veteran players and that’s money time. I want to be a part of that.”

After Washington had reduced the margin to a point, Irving then converted two free throws with 10.2 seconds to go. The Wizards’ Bradley Beal missed a game-tying 3-pointer with 4.9 seconds left and Love salted the game away with two final free throws with 3.6 seconds remaining.

“That’s who he is,” Lue said of Irving. “He’s a big-time player who comes up big when it counts.”

“He’s always fantastic, no matter what’s going on, he’s able to stay in control, and he was able to take over.”

Trailing by four at halftime, the Cavaliers had used 57 percent shooting from the field and a 14-5 edge in rebounds during the third quarter to take an 86-82 lead as the period ended. The key stretch came during a 19-4 run that had given them a 78-72 advantage, though Love was a key factor throughout the period, scoring 15 points.

Late in the fourth quarter, Washington split a pair of a free throws and a Beal 3-pointer with 43.9 seconds left knotted the score at 116 apiece. Tristan Thompson then split two free throws with 25.5 seconds remaining, but Markieff Morris’ putback with 12.2 seconds to go gave the Wizards the lead back. James then stunningly missed his layup, though he more than made up for the miss with his clutch basket.

“We ran the play and got what we wanted, but he (James) just missed it,” Lue said.

James actually noted that he had traveled on the play:

“The extra step I took threw me off my rhythm and I missed it,” James said.  “However, we’ve got championship DNA and we got big performances from Kev and Kyrie.”

Thompson’s strong performance was overshadowed by his teammates, but the sixth-year center contributed his own double-double with 22 points and 12 rebounds. The only other Cavs player to score in double figures was Kyle Korver, who ended the night with 13 points, including a pair of key 3-pointers during the fourth quarter.

For Washington, which watched its seven game winning streak come to an end, Beal was almost unstoppable over the course of the night, finishing with 41 points.

One injury note on the evening was that Iman Shumpert left the game with a sprained left ankle in the latter portion of the third quarter and didn’t return for the remainder of the game.

The road remains difficult for the Cavaliers as they travel for a road clash against the Indiana Pacers on Wednesday night. Tipoff for the game will be just after 7 p.m. ET, with the Cavs looking to end what’s been a frustrating stretch of more than six years of losing 12 of their last 13 games in Indianapolis.