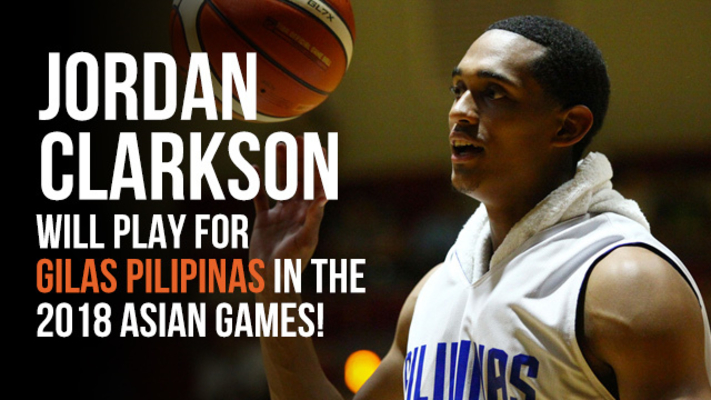 After a 24-hour period in which it appeared his dreams of representing the Philippines in the 2018 Asian Games were squashed, Cleveland Cavaliers guard Jordan Clarkson will in fact represent his mother’s native country in the basketball tournament, which starts Thursday in Indonesia.

On Saturday, Clarkson was told by the NBA he would not be able to participate in the event. However, Philippine sports officials were successful in appealing the ruling after pointing out that Houston Rockets center Zhou Qi was allowed to play for his native country of China.

Richard Gomez, head of the Philippine delegation, expressed confidence to DZMM that Clarkson would be playing in the team’s first game against Kazakhstan:

“The NBA gave the nod allowing JC to play at the Asian Games. We will have to plead to INASGOC (Indonesia Asian Games Organizing Committee) and OCA (Olympic Council of Asia) for his re-entry to play. JC will take the earliest flight available to Jakarta to make it to our game against Kazakhstan.”

After receiving word he wouldn’t be able to play in the tournament on Saturday, Clarkson shared a heartfelt message to his Filipino brothers and sisters in which he expressed disappointment but remained steadfast in his desire to represent the country in the future. He’ll now get the chance to do that sooner rather than later.

Chris Roberts is a freelance writer and passionate sports fan who counts the Toronto Raptors as his favorite NBA team. As with LeBron James and the "Decision," he hopes you won't hold that against him. In the past, he has held news editor and sports editor positions with weekly and biweekly newspapers in Alberta, Canada, where he covered everything from junior hockey to college basketball.