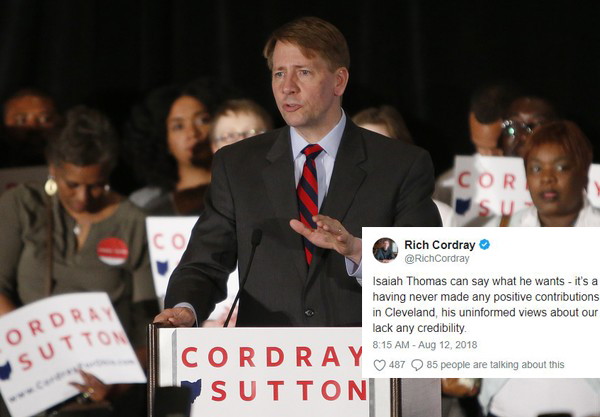 The volatile social media post by former Cleveland Cavaliers guard Isaiah Thomas over the weekend resulted in plenty of controversy and eventually led to an apology from Thomas. In the midst of the situation, the state of Ohio’s Democratic candidate for governor, Richard Cordray, offered his own social media rebuke of Thomas.

Isaiah Thomas can say what he wants – it’s a free country. But having never made any positive contributions during his brief stop in Cleveland, his uninformed views about our great city and state lack any credibility.

Thomas on Saturday used his Instagram account to describe the city of Cleveland as a “s—h—.” In addition, he also indicated that such a status was the reason that LeBron James left the Cavaliers to sign with the Los Angeles Lakers last month.

Having only been a member of the Cavs for less than six months, Thomas had little time to truly form a solid opinion of the city. Most of that time was spent rehabilitating an injured hip, which kept him off the court until a Jan. 2 home game against the Portland Trail Blazers. In that contest, Thomas’ entry into the game resulted in a standing ovation from the sellout crowd at Quicken Loans Arena.

Over the next five weeks, however, it became quickly apparent that Thomas was a bad fit for the team. That resulted in a trade to the Lakers on Feb. 8, with the Cavaliers bouncing back from their rut to eventually reach the NBA Finals for the fourth consecutive year.

Cordray is currently running for governor of Ohio after having served in the Obama administration as director of the Consumer Financial Protection Bureau. While his comments will go over well in the Cleveland area, they may not necessarily provide a sustained boost to his campaign. That’s because the area was already considered to have a strong voting base in favor of Democratic politicians.