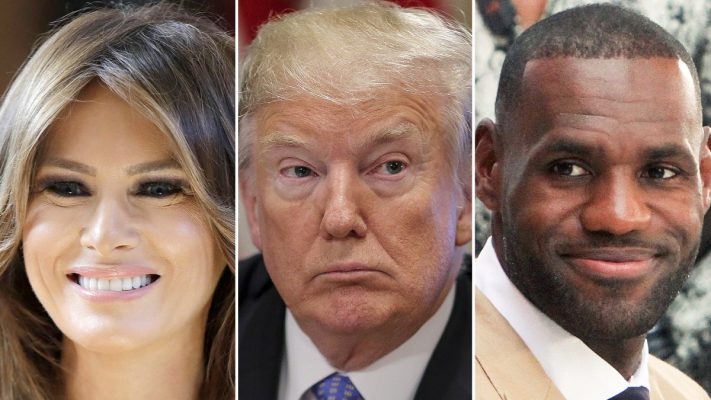 The furor that erupted in the wake of President Donald Trump‘s harsh criticism of former Cleveland Cavaliers forward LeBron James has brought forth countless people showing their support for the 15-year NBA superstar. Undoubtedly, one of the most surprising in this category is the president’s own wife, Melania Trump.

Unlike her husband, the First Lady took the high road on Saturday, in a statement that was released by her spokeswoman.

“It looks like LeBron James is working to do good things on behalf of our next generation and just as she always has, the First Lady encourages everyone to have an open dialogue about issues facing children today,” a portion of the statement read.

The controversy began on Friday night after the president watched a rebroadcast of a James interview with CNN’s Don Lemon that was first shown on Monday. In the interview, James criticized Trump on multiple occasions, which subsequently led to the late-night tweet.

The James interview with Lemon had been done in conjunction with the opening of James’ I Promise School in his hometown of Akron. That new facility was noted in the First Lady’s message, which hinted at a possible future visit:

“Her platform centers around visiting organizations, hospitals and schools, and she would be open to visiting the I Promise School in Akron.”

During the presidency of Barack Obama, his wife Michelle visited the Akron area in October 2015 to promote with James the importance of postsecondary education. James also visited the Obamas in the White House after winning titles with the Miami Heat in 2012 and 2013, and with the Cavaliers after their 2016 title.

At the present, James has not offered any rebuttal to Trump’s volatile remarks.