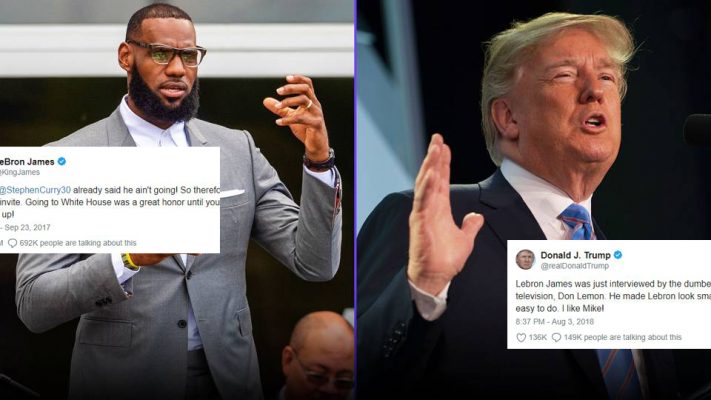 When former Cleveland Cavaliers forward LeBron James opened up the I Promise School in his hometown of Akron this past Monday, he received high praise for his philanthropic gesture. However, President Donald Trump found a way to attack James and his intelligence after the NBA veteran once again offered critical comments about him.

Lebron James was just interviewed by the dumbest man on television, Don Lemon. He made Lebron look smart, which isn’t easy to do. I like Mike!

Trump’s tweet, which also included his alleged preference for Michael Jordan as a basketball star, came in the wake of a CNN rebroadcast on Friday night of Don Lemon‘s interview of James. That interview, which was originally shown on Monday, largely focused on the new school, though James also stated that Trump was using athletics to try and split up the country.

Even before Trump was elected in November 2016, James had criticized him and has continued that tone. Last year, James tweeted that Trump was a “bum” after it was announced that the Golden State Warriors would not be invited to the White House to celebrate their 2017 title.

James has also criticized Trump for his role in the NFL’s controversy over the National Anthem to his role as commander in chief.

After Trump offered his most recent tweet, Lemon responded and compared James’ actions to Trump’s controversial approach to dealing with illegal immigration.

Trump’s criticism of James is in stark contrast to some previous tweets that offer some amusing irony in the aftermath of Friday night’s social media outburst.

Congratulations to @KingJames on winning Athlete of the Year in last night’s @ESPYS. LeBron is also a great guy!

Great shot by @KingJames yesterday. Lebron is a tough competitor who delivers under pressure.

After signing a contract with the Los Angeles Lakers, James will undoubtedly have a larger platform to offer such opinions in the future. His criticism of Trump, whose current term of office doesn’t end until January 2021, doesn’t figure to subside. One thing that does seem certain is that the fireworks will continue on both sides.