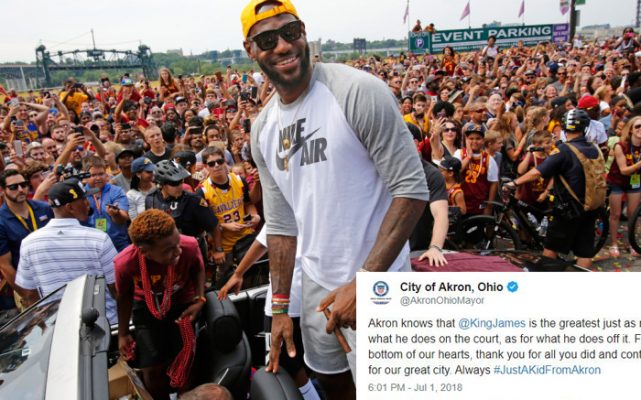 LeBron James will be playing for another city when the 2018-19 season opens after it was announced that he will be accepting the Los Angeles Lakers’ offer of $154 million. Though Cleveland Cavaliers fans are certainly disheartened by the news, the immediate reaction is that of acceptance.

The same is true for the city of Akron, Ohio, James’ hometown which has been supportive of the 15-year veteran regardless of his decisions in the past. After the recent announcement, the city tweeted out its gratitude to James for the many things he has done (and continues to do) for Akron and its people.

Akron knows that @KingJames is the greatest just as much for what he does on the court, as for what he does off it. From the bottom of our hearts, thank you for all you did and continue to do for our great city. Always #JustAKidFromAkron pic.twitter.com/Nw7iFOggpf

James thanked the city of Cleveland in an Instagram story which included a photo of the Cavaliers’ 2016 championship parade.

“Thank you Northeast Ohio for an incredible 4 seasons,” he wrote. “This will always be home.”

In the four years that he spent with the Cavs since 2014, James carried the team to four NBA Finals appearances including a championship in 2016.