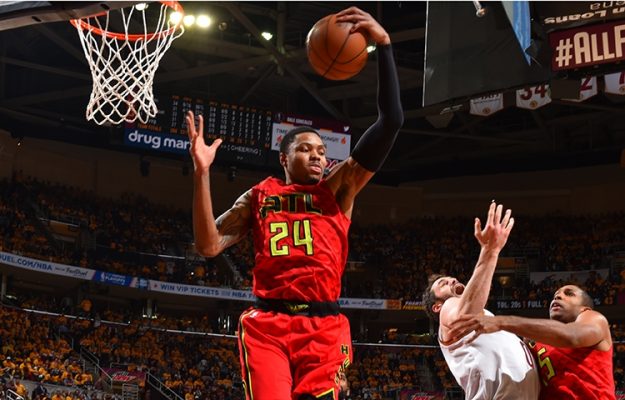 In the aftermath of being on the receiving end of a record 25 three-pointers by the Cleveland Cavaliers during Wednesday night’s Game 2 of the Eastern Conference semifinals, three members of the Atlanta Hawks expressed annoyance with the bombardment, indicating that it was “unprofessional,” and that the Cavaliers could be paid back in the future.

The trio of Al Horford, Kent Bazemore and Paul Millsap all attempted to make clear to Cleveland.com that they weren’t upset about the Cavs celebrating the record, though the comments seemed to discount such disclaimers.

“We probably wouldn’t do anything like that [if we were in that position],” Horford said. “It’s hard to say, but I would say no.”

Bazemore was the Hawks player that seemed most upset, invoking a philosophy of payback to get across his message.

“I’m a firm believer in karma,” Bazemore said. “Maybe we’ll be the team to break that record soon. Everyone knows how they play. They get out in front and they’re a totally different team. It is what it is. We’ll see them again. That wasn’t Game 4. That was only Game 2. They still have to beat us two more times before they can really celebrate anything.”

TNT commentator Charles Barkley had gone even further than Bazemore in his post-game remarks, essentially encouraging some overly physical play on Atlanta’s part.

“You’ve got to take somebody out,” Barkley said. “When a team is just embarrassing you, shooting threes when the game is way over, just trying to set a record…You have to knock the (heck) out of them. Not for this game; to set the tone for the next game.”

Millsap cited the unwritten rules of professionalism in making his case:

One of the Cavaliers’ newest players, Dahntay Jones was the player who broke the record, scoring with 2:22 left in the contest. He was at a loss to understand the Hawks’ complaints.

The two teams will face each other twice in less than 48 hours, beginning on Friday night, with both games in Atlanta. These remarks will no doubt resonate with the home crowd, while the Cavaliers will focus on winning two more games in order to advance to the Eastern Conference Finals.