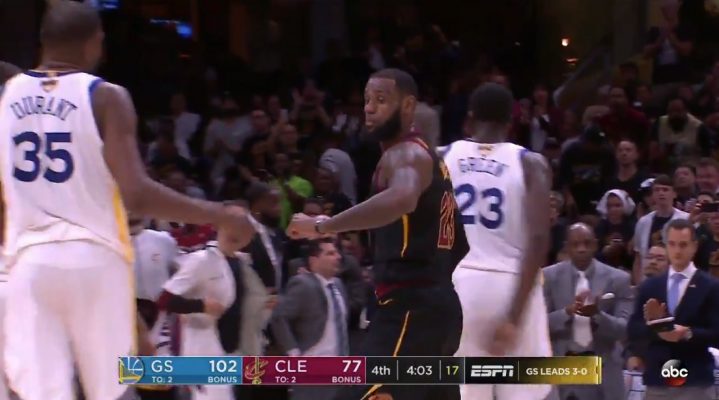 The seemingly inevitable took place on Friday night when the Cleveland Cavaliers were badly beaten by the Golden State Warriors, 108-85, in a four-game sweep of the 2018 NBA Finals.

While the Cavs were unfortunately swept in the series, it would have been a whole lot uglier had Cavs not enjoyed three strong performances and one legendary one by LeBron James.

When James checked out of Game 4 late in the fourth quarter, a packed Quicken Loans Arena thanked the three-time champion with a standing ovation and chants of “MVP.”

LeBron James checks out….. is this the last time he's in a #Cavs uniform? pic.twitter.com/lNY8BNkPuS

The salute from the fans on Friday night carried quite a lot of weight. Not only was it the final game of the 2017-18 NBA season, it may very well have been the last game James will play in a Cavs uniform. He will become a free agent in a matter of weeks, and according to recent reports James may already have one foot out the door in Cleveland.

If that is the case, James was sent off in a way that any legend deserves, with a packed arena thanking him for all that he has done for the fans, the team, and city.

Whether James decides to stay or go, it’s sure to be an emotional summer for Cavs fans everywhere. Hopefully, the 2018-19 season begins with another standing ovation for James as he takes the court in the Wine and Gold once again.