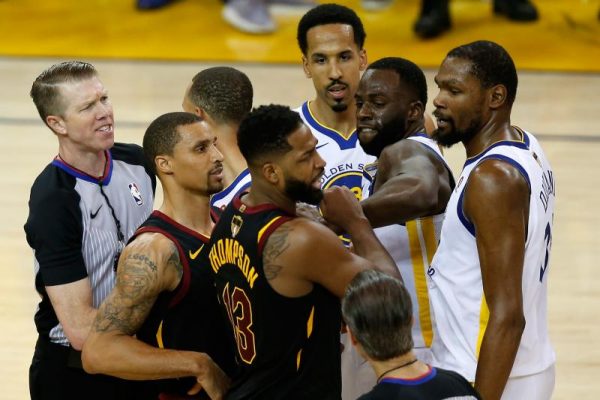 If Cleveland Cavaliers fans needed another reason to hate Golden State Warriors forward Draymond Green, they got it on Saturday.

Just over 24 hours before tipoff of Game 2 of the NBA Finals, Green issued a threat to Tristan Thompson to let him know that while the physicality on the court may not continue, they could always work out their differences off of it.

“I can’t meet him outside of (the arena), because I’ll still get fined,” he said according to USA Today‘s Sam Amick. “But I can meet him in the streets any day. So you can say (that) somebody (should) meet you at the bus, (but) I’m not (going). I’m going to keep taking care of my family. I’m not going to meet you at the bus.”

Green wasn’t done there, saying that once the offseason hits, he’s more than happy to trade blows with the Cavs center.

“But you know (in) the summers, you can meet anybody anywhere,” he said. “So all that ‘Meet me outside, meet me at the bus,’ like I ain’t interested in giving up no money for that. But if you want to see me somewhere else, that’s fine—anytime.”

Finally, he told Amick that he was happy that Thompson wasn’t suspended as a result of the late-game scuffle the two shared at the end of Game 1.

“I don’t want nobody to get suspended,” Green said. “That does nothing for us, or for me. I’m happy he only got a $25,000 fine. … I maybe (would have) gotten suspended, but ain’t nobody else me so I really don’t care about that.”

At least that’s one opinion that Cavs fans and Green both share. Thompson being available for Game 2 could be huge for the Cavs, as he offers the size and aggressiveness that could help them dominate the boards.

Hopefully Green remembers his desire to keep the aggression off the court, it would be a shame if things got even uglier in Game 2.