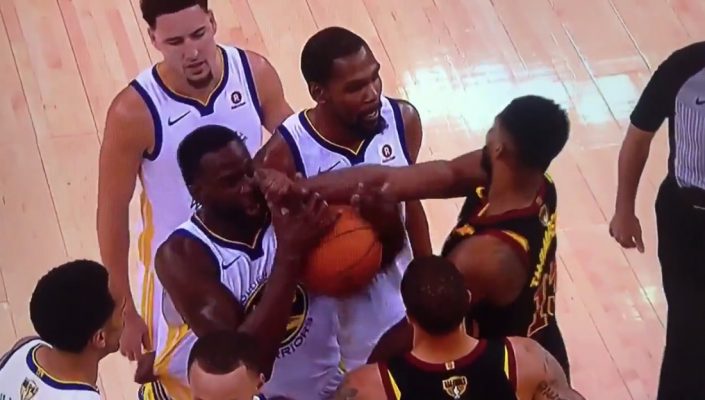 The Cleveland Cavaliers fell to the Golden State Warriors in heartbreaking fashion by a score of 124-114 as they now trail the NBA Finals 0-1.

Cavs superstar LeBron James dropped an otherworldly 51 points, eight rebounds, and eight assists, but a costly miss at the free-throw line by George Hill at the end of regulation, followed by a huge mental lapse by J.R. Smith sent the game into overtime.

That’s when the Warriors pulled away and tensions reached an all-time high.

After Tristan Thompson was ejected for a foul on Shaun Livingston, he was subsequently mocked by Draymond Green.

Another angle of Tristan Thompson throwing the ball in Draymond Green's face. pic.twitter.com/8rch3YbWjw

Thompson responded by throwing the ball in Green’s face, which led to a scuffle between the two teams.

The NBA will likely look at the play further in the following days and there is a high chance that Thompson will be suspended for at least a game.

Draymond Greenfeaturednews tickerTristan Thompson
← Previous Story Draymond Green Calls LeBron ‘F—— P—-‘ After Ramming Fingers Into His Eye
Next Story → LeBron James Blocks Steph Curry, Tells Him to ‘Get the F—‘ Out of His Face