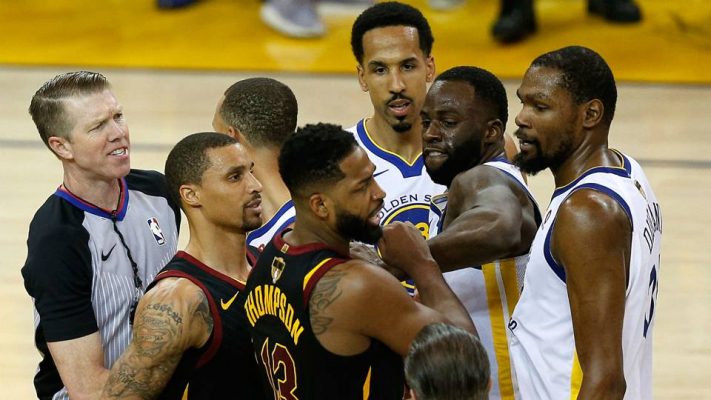 In the waning seconds of Game 1 of the NBA Finals on Thursday night, Golden State Warriors forward Draymond Green and Cleveland Cavaliers center Tristan Thompson got into a little scuffle that could have had huge ramifications.

With 2.6 seconds left in overtime, Thompson was called for a flagrant-2 foul after he got a bit too aggressive while trying to defend a Shaun Livingston jump shot. Thompson was ejected from the game, but before he could leave the court, Green injected himself into the situation jawing at Thompson. Thompson responded by taking the ball and shoving it into Green’s face. He was then escorted off of the court before things got any more serious.

Because of the ejection and subsequent scuffle there was a very real concern that Thompson, who has played an integral role in the Cavs’ success this postseason, would be suspended for Game 2.

After an entire day of waiting on Friday, fans finally discovered what the NBA’s ruling would be regarding Thompson’s availability in Game 2.

The NBA has fined Cleveland's Tristan Thompson $25,000, and downgraded his Flagrant-2 foul from Game 1 of the NBA Finals to a Flagrant-1. No other discipline is coming regarding the series opener. #NBAFinals

While the fine may be bad news for Thompson’s bank account, the fact that he will be available for Game 2 is great news.

Thompson has had several big games so far this playoffs, and while he finished Thursday night’s game with just two points and five rebounds, he definitely offered a level of physicality and attitude that helped the Cavs very nearly win Game 1 and steal home-court advantage in the series.

Now, with his future in the series assured, Thompson will look to bounce back with the rest of his teammates and prepare for the upcoming Game 2 on Sunday. Hopefully he’s able to contain his temper.