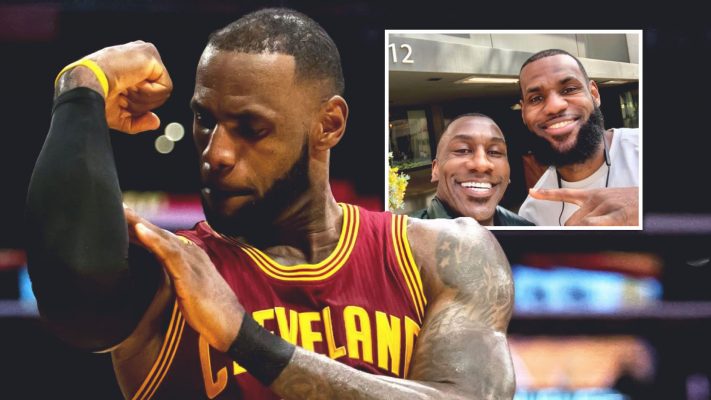 LeBron James wasn’t ready for his season to end in front of a capacity crowd at Quicken Loans Arena on Friday night.

The Cleveland Cavaliers avoided elimination and will be playing a Game 7 on the road to decide the outcome of the Eastern Conference finals thanks to a legendary performance from the four-time MVP.

He carried the Cavs to a 109-99 victory in Game 6 versus the Boston Celtics, a must-win situation in which James recorded 46 points, 11 rebounds and nine assists. He also shot 17-of-33 from the field, including a scintillating 5-of-7 from three-point range.

After the game, Fox Sports analyst and avid James supporter Shannon Sharpe took to social media to call out all the “haters.”

“I got something for all you hatin’ mofos,” Sharpe said. “I want you to run tail that! Jump on my timeline with that ‘F’ stuff and see what I do for you. Now I’ve been telling y’all for the longest. Y’all didn’t wanna hear me, but you gotta listen now. I should have your attention. After he dropped 46, 11 and nine, I should have your undivided attention, all you hatin’ mofos. Hate on that! 46, 11 and nine!”

For now, Sharpe was able to fend off the “wolves” that have been attacking him incessantly for being on the side of the Cavaliers forward. As co-host of the show “Skip and Shannon: Undisputed,” he has had to defend himself almost every day against Skip Bayless’ critical attitude toward James.

Inasmuch as James is one of the most revered athletes of our time, he also has numerous detractors, commonly known as “LeBron haters.” After staving off elimination and doing so in spectacular fashion, James has silenced some of the haters and given his fans ample ammunition, at least for the next few days.

The three-time Finals MVP will have to come up big one more time as the series shifts to hostile territory at Boston’s TD Garden.

Based on his Game 7 history, James is unfazed when the stakes are highest. He averages 34.9 points, 8.0 rebounds and 4.5 assists per game while shooting 48.4 percent from the field. With a supporting cast that has been inconsistent, especially on the road, James has to surpass those numbers to stay alive in the postseason.

But if recent history is of any indication, expect James to deliver another historic game at Boston on Sunday night.