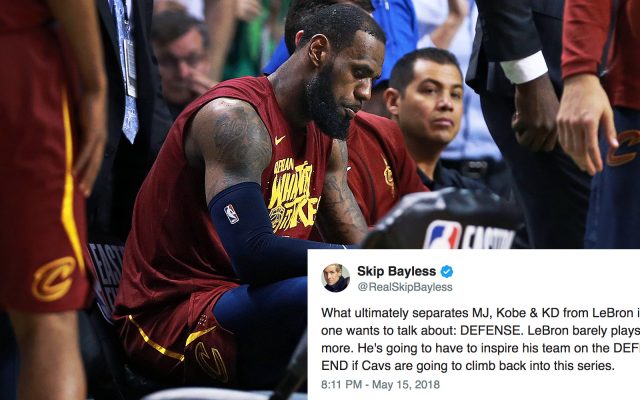 Throughout a Hall of Fame-worthy career that’s still going strong, Cleveland Cavaliers forward LeBron James has had to deal with critics, including persistent attacks from media personality Skip Bayless. After the Cavaliers dropped Game 2 of the Eastern Conference Finals to the Boston Celtics on Tuesday night, Bayless took to social media to criticize one aspect of James’ overall game.

What ultimately separates MJ, Kobe & KD from LeBron is what no one wants to talk about: DEFENSE. LeBron barely plays any D any more. He's going to have to inspire his team on the DEFENSIVE END if Cavs are going to climb back into this series.

The fact that James ended his night with a triple-double by scoring 42 points, handing out 12 assists and hauling down 10 rebounds was immaterial to Bayless. Instead, the Cavaliers’ second-half defense, which allowed 60 points after giving up just 48 in the first two quarters was what got Bayless’ attention.

Bayless failed to note that after James briefly left the game after being struck in the jaw by the shoulder of the Celtics’ Jayson Tatum in the second quarter, the Cavaliers were outscored 71-47 for the rest of the game.

In addition, Bayless declined to note how James 21 first-quarter points nearly matched the 23 points the entire Celtics squad scored during that period. Finally, Bayless offered no details on how James was expected to inspire his teammates through his defense.

Regardless of the opinions of Bayless, Cleveland currently finds itself in a 2-0 hole in the best-of-seven series. To dig themselves out of that situation, the Cavaliers need to win four of the next five games or will watch another Eastern Conference team play in the NBA Finals for the first time since 2013 — which was shortly before the return of James.