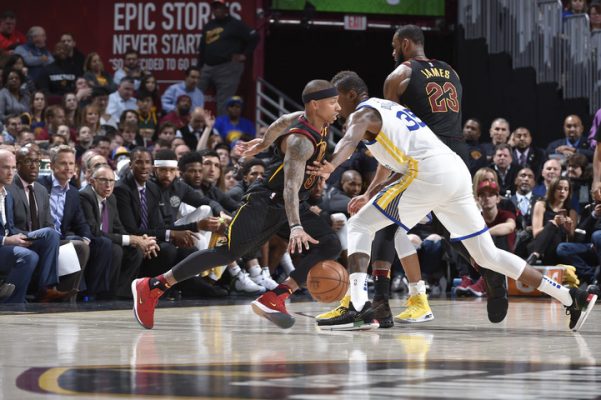 (Cleveland, OH) — A disastrous stretch to start the fourth quarter doomed the Cleveland Cavaliers as they dropped a 118-108 contest to the Golden State Warriors at Quicken Loans Arena on Monday night. The loss marked the Cavaliers’ fourth straight loss and eighth defeat in their last 10 contests.

Trailing 93-91 to start the final period, the Cavs went through an early stretch of missing 15-of-16 field-goal attempts and finished the quarter hitting just 6-of-23 (26 percent) from the field. That allowed the Warriors to use a 20-6 run to expand their lead into double-digits to as many as 14 on two occasions. That deficit against a team of Golden State’s caliber proved to be impossible to overcome.

“I thought we did some really good things for the first three quarters, but we didn’t finish the game like we wanted to,” Cleveland head coach Tyronn Lue said after the game. “But we had a slow start in that third quarter that kind of got them going, gave them momentum. The effort and intensity were there, but some loose balls we just couldn’t get to.”

LeBron James had a team-high 32 points to lead the Cavaliers, adding eight rebounds and six assists. Isaiah Thomas had 19 points and four assists in 32 minutes, while Kevin Love tossed in 17 points and grabbed seven rebounds. Dwyane Wade was the only other Cleveland player to score in double figures, contributing 10 points and collecting seven rebounds and five assists.

The fast-paced first quarter saw the two teams combine for 72 points, with both squads connecting at better than 50 percent from the field. However, the two teams also combined for 10 turnovers during those opening 12 minutes.

The Cavaliers held a pair of seven-point leads in the first, but struggled on defense against the Warriors’ ball movement. Golden State collected assists on all but two of its 13 field goals during the period, though when the horn sounded, Cleveland had held a 37-35 advantage.

Maintaining their shooting touch during the second quarter, the Cavaliers led by as many as nine at 44-35. The Cavs also clamped down on the defensive front, limiting the Warriors to 36 percent during the quarter.

Wade was a key facet of the second-quarter lineup, scoring eight points and finishing with four assists for the half. His steal in the closing seconds before halftime turned into a Jeff Green dunk to give the Cavs a 64-57 lead at intermission.

Each team exchanged leads over much of the third quarter, with Golden State managing to match their first half output in 3-pointers with five. Meanwhile, Cleveland continued to struggle in that department, hitting at just a 26 percent rate up to that point.

“For offensive rebounds, if you don’t rebound the basketball and they get to it first, they make you pay,” Lue said of the Warriors. “Those are just some things we have to clean up, but their speed was definitely a factor in this game. When we missed a shot, a layup or a three, they were off to the races.”

The Cavaliers will be off until Thursday night, when they host the Orlando Magic. That game will tip off just after 7 p.m. ET.