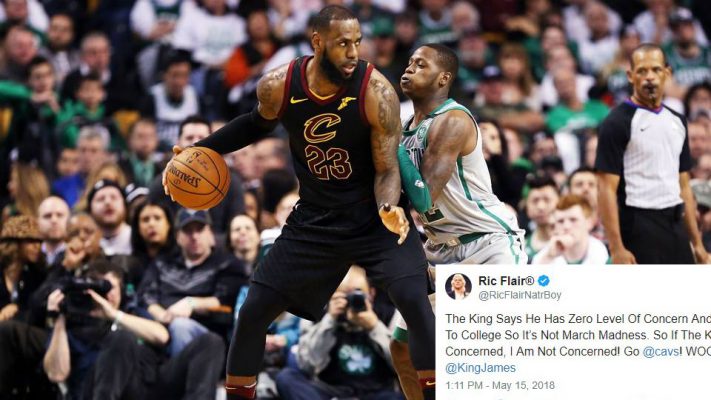 The Cleveland Cavaliers are just hours away from taking the court for Game 2 against the Boston Celtics in the Eastern Conference Finals.

While Game 1 did not go as the Cavs would have liked, as they were dominated for much of the contest on their way to a 108-83 loss, they have a secret weapon in their corner for Game 2.

Wrestling icon and LeBron James fan Ric Flair took to Twitter to remind his followers never to doubt the King.

The King Says He Has Zero Level Of Concern And He Didn’t Go To College So It’s Not March Madness. So If The King Is Not Concerned, I Am Not Concerned! Go @cavs! WOOOOO! @KingJames pic.twitter.com/ouHerupG2b

Flair is, of course, referencing James’ own words following Game 1. The three-time NBA champ assured fans that he was not concerned about the lopsided loss on Sunday.

James had an uncharacteristically average performance in Game 1 when he finished the night with just 15 points on 31.3 percent shooting. Based on that, it seems reasonable for Flair and the rest of his fans to expect a pretty sizable bounce-back in Game 2.

Early on Tuesday, James was seen warming up and taking shots at Boston’s TD Garden hours before tip off. Considering that, it seems Flair’s confidence is at the exact right level.