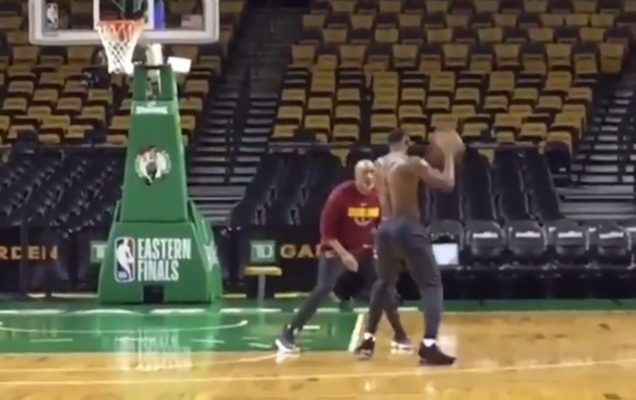 LeBron James has played brilliantly throughout the Eastern Conference playoffs thus far, and is without a doubt the biggest reason why the Cleveland Cavaliers have advanced to the conference finals. That being said, he suffered his worst performance in the playoffs by far when the Cavs fell to the Boston Celtics 108-83 on Sunday.

James seems determined to have a rebound performance in Tuesday night’s Game 2 and was seen warming up and getting shots in early on Tuesday in Boston’s TD Garden.

LeBron in the gym early. Tonight will be good. ?(via khightower/Twitter)

On Sunday, James finished the night with 15 points, nine assists, seven rebounds, and two blocks. He also committed seven turnovers in the game and shot just 31.3 percent from the field. When comparing that stat line to his performances in the previous round of the playoffs, where he averaged 34.0 points on 55.3 percent shooting, 11.3 assists, and 8.3 rebounds, it’s quite clear why the Cavs struggled against the Celtics in Game 1.

The bad news is the Cavs are down 1-0 in the series. The good news is the four-time MVP seems extremely determined to even the series on Tuesday night. Game 2 tips off at 5:30 pm, and if his pregame preparations are any indication, James is ready to put on a show.