Scottie Pippen’s Message to Rodney Hood: ‘When You Playing Like Garbage, You Need Garbage Time’ 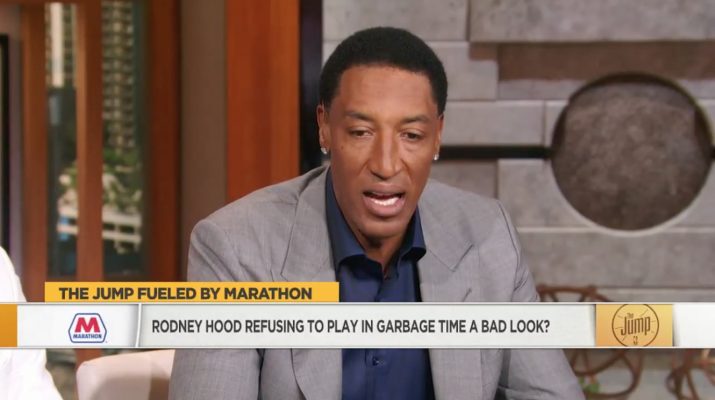 The reverberations from Rodney Hood‘s controversial refusal to enter Game 4 of the Cleveland Cavaliers‘ Eastern Conference semifinals against the Toronto Raptors continue long after that choice was made. Among the latest criticism directed at Hood is a blunt assessment from Hall of Famer Scottie Pippen, who pointed to Hood’s own struggling play as the reason for being in that particular position.

Appearing on the ESPN program “The Jump” on Tuesday, Pippen was asked his opinion of Hood’s decision. After first stating that it was “bad judgment on his part,” the criticism then got much more severe:

“Based on the way that [Hood’s] been playing throughout the playoffs in the last couple seasons,” said Pippen. “When you playing like garbage, you need garbage time.”

During Pippen’s own playing career, he had a similar moment of refusing to enter a game. That allowed him to offer some unique insight when comparing Hood’s choice with his own.

Fellow panelist Paul Pierce was equally critical of Hood. The retired player indicated that the ill-timed thought process used by Hood in making that move helped explain why his former team, the Utah Jazz, traded him to the Cavaliers in February. He also pointed out that Hood had failed to take advantage of a leadership opportunity with Utah at the start of the the 2017-18 season.

Hood reportedly apologized to Cavaliers general manager Koby Altman on Tuesday morning and is expected to do the same with teammates and coaches on Thursday. That’s when the Cavaliers will resume practicing for the Eastern Conference Finals.