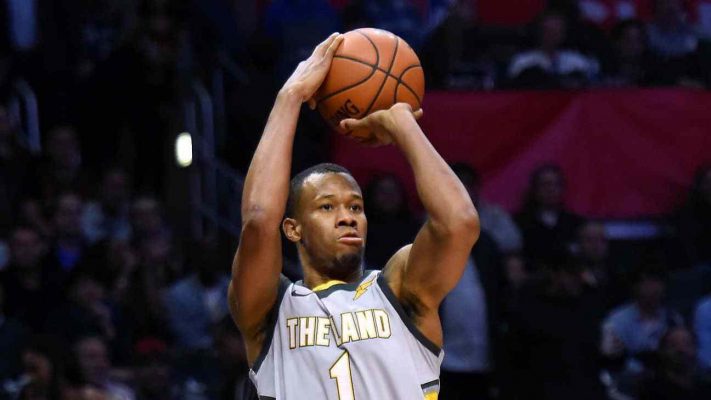 It was a joyous Monday night for the Cleveland Cavaliers who swept the Toronto Raptors 4-0 after a 128-93 annihilation of the East’s No. 1 seed in Game 4 of their series. Amidst the celebratory mood in Cleveland, there was one issue that may have spoiled the festive atmosphere in the locker room after the game.

Nearly everyone in a Cavs uniform was in good spirits except perhaps one bench player. Rodney Hood suspiciously registered zero minutes.

According to Jason Lloyd of The Athletic, Hood was not on the floor for reasons other than Cavs head coach Tyronn Lue’s decision not to put him in:

“Not everyone seemed concerned with the team aspect, however. Rodney Hood refused to go into the game during the fourth quarter Monday, multiple sources told The Athletic, angering a number of teammates and those within the organization.

“Hood finally lost his place in the rotation Monday when Lue went with rookie Cedi Osman instead. It was the first time since joining the Cavs that Hood was clearly out of the rotation – and rightfully so. He has been unplayable most of these playoffs.”

Here’s how the entire incident played out according to Lloyd and his sources:

“When the Cavs called a timeout with a 30-point lead and 7:38 left Monday, Lue tried inserting Hood for James. It was a great opportunity for a struggling youngster to try to find his rhythm without any pressure before the next series. Instead, Hood refused to go in, multiple sources confirmed. A number of veterans huddled around him during the timeout and tried talking sense into him, but Hood still refused to go, so Jose Calderon subbed into the game instead. Hood dressed quickly and was one of the first players out of the locker room after the game.”

Hood is a very good player but he’s had a terrible playoffs so far, averaging only 4.6 points on 39.6 percent shooting. He has the talent to be one of the better players in the Cavs’ lineup but has strangely been out of sync lately.

He’s a restricted free agent this summer and could have improved his bid for a long-term contract with a good showing in this postseason. But with an attitude unbecoming of a player that’s part of a championship contender aside from his poor play, Hood’s chances of a lucrative deal may have vanished into thin air.

Lloyd also stated that Cavs GM Koby Altman will be meeting with Hood to hear what he has to say about the matter. It’s more than likely that a suspension is forthcoming and unless Hood apologizes to his coaches and his teammates, he has likely worn out his welcome in the locker room and on the hardwood.