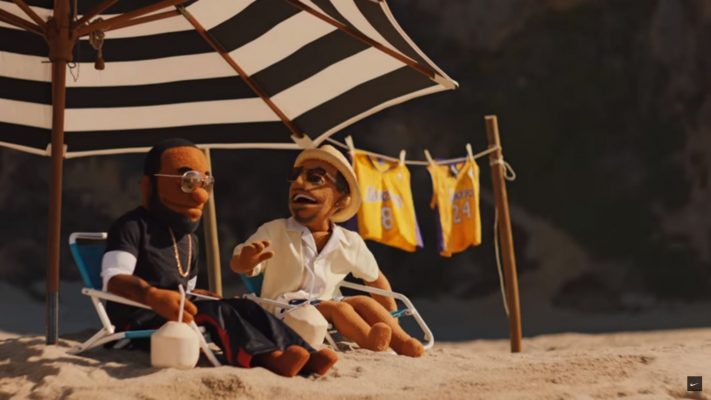 In “Burden,” Bryant’s puppet overwhelms James by discussing his numerous accolades and the burden having both No. 8 and No. 24 retired before finally asking the three-time champion to express gratitude for bearing such a heavy burden.

In the next commercial, “Uncle Charlie,” he wonders which Bryant, No. 8 or No. 24, was better. James, wanting no part of the All-Star’s rant, goes on to say that he has to be in Milwaukee for a matchup against the Bucks.

Finally, the 2008 NBA MVP explains the interesting difference between the artsy No. 8 and entrepreneurial No. 24 in “Handicrafts.” The Cleveland Cavaliers forward eventually gets fed up and leaves the nice beach scenery.

The Los Angeles Lakers scoring machine had plenty of duels with James before retiring in 2016. Both legends shared many good memories together, including capturing gold medals in the 2008 and 2012 Olympics, but they also had a special rivalry that people have been analyzing for years. To this day, NBA pundits debate which player is better.

Although the King’s statistics are easily better and he has more MVP awards, it’s Bryant’s five rings that provide the argument in the debate. In addition, James posts a Finals record of 3-5 while Bryant posts a strong one of 5-2.

Still, there’s time for Cavs star to embellish his record and capture more rings. In the meantime, everyone will celebrate Bryant’s memorable career in the NBA as he gets ready to retire his prolific jerseys.