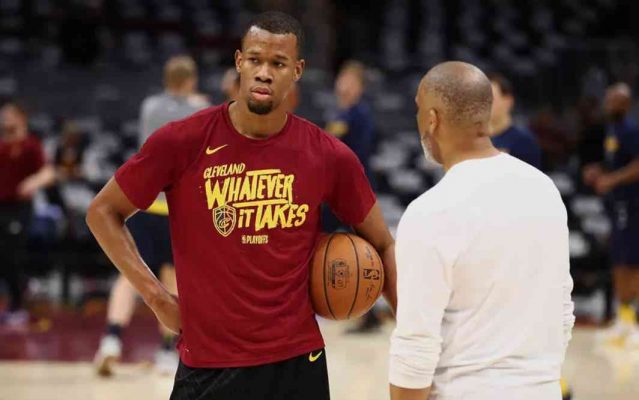 In the midst of celebrating a four-game sweep over the Toronto Raptors in the Eastern Conference semifinals, the Cleveland Cavaliers are being forced to deal with a controversy stemming from Rodney Hood‘s actions during the course of Monday night’s Game 4. Despite his insubordination in refusing to enter the game, Hood apparently will not be disciplined by the team for the issue.

“Hood feels badly for causing a distraction at a time when the focus should be on Cleveland’s sweep of the Raptors and spot in the conference finals.”

That distraction reportedly upset a number of his teammates when he ignored their attempts to convince him to replace LeBron James for a short period. Hood apparently dressed quickly and left the locker room after the game.

The basis for Hood’s actions were his demotion from the team’s rotation in favor of teammate Cedi Osman. Hood, who was acquired on Feb. 8 from the Utah Jazz, has struggled over the past few months because of injuries, most notably back trouble. In the two playoff series, Hood averaged 6.3 points against the Indiana Pacers on 46.2 shooting from the field, but just 16.7 from beyond the arc. Against the Raptors, Hood saw just 39 minutes of action, connecting on just one of his nine shots from the field and missing a trio of 3-pointers.

The Cavaliers are expecting to face the Boston Celtics in the Eastern Conference Finals for the second consecutive year, but have to wait for the Celtics, who currently hold a 3-1 advantage in their series with the Philadelphia 76ers, to advance. The likely date for Game 1 of the series will be on Sunday afternoon at TD Garden in Boston.