LeBron’s Son Takes Shot at Drake, Who Angrily Claps Back via Social Media 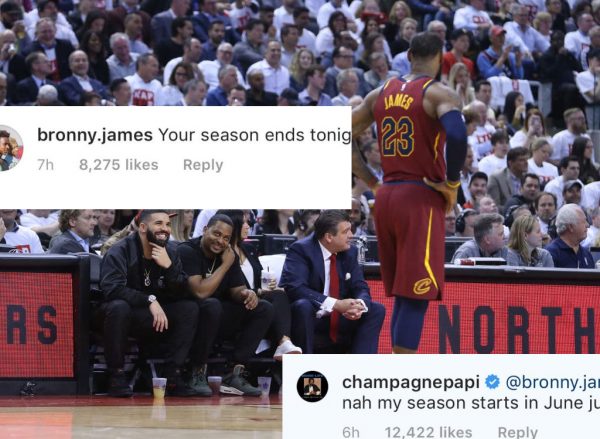 Despite being down three games to none, rapper and Toronto Raptors celebrity superfan Drake is still talking trash. While trading barbs with actual members of the Cleveland Cavaliers roster may have been too much for the famed rapper, that hasn’t stopped him from getting into it with LeBron James‘ teenage son LeBron James Jr.

James Jr. showed up in the mentions of Drake’s Sunday evening Instagram post to remind the diehard Raptors fan that his team’s entire season is on the line in Monday night’s Game 4 and Drake refused to let it go.

Drake first began the heated back-and-forth between himself and the Cavs organization when he was seen exchanging words with Cavs big man Kendrick Perkins during Game 1. It now seems that he has decided to pick on somebody his own size in the form of 13-year-old James Jr.

If the Raptors are able to get out of Quicken Loans Arena with a win on Monday night, Drake is sure to continue talking smack. Considering the way James Jr.’s father is playing at the moment, it’s quite likely that Drizzy will have to wait until next season to root on his favorite team.

Perhaps he should think about leaving the trash talk to the professionals.