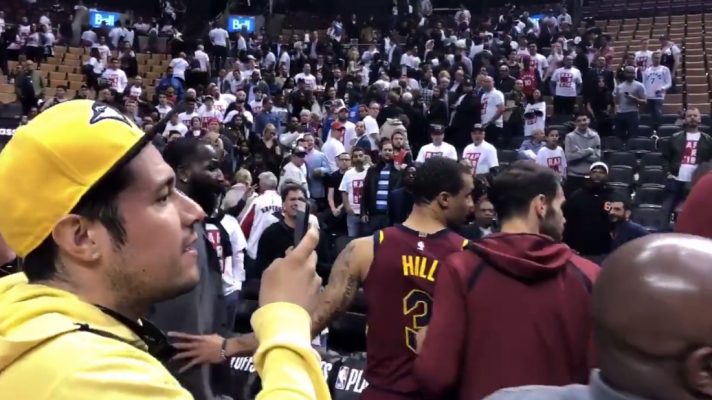 Rapper and Toronto Raptors superfan Drake was seen having a heated exchanged with Cleveland Cavaliers big man Kendrick Perkins during Game 1 of the Eastern Conference semifinals on Tuesday night.

After the Cavs’ exhilarating overtime victory, it appeared that Drake was not done with the conversation.

Following the game, Drake and his entourage could be seen yelling at Perkins as he headed to the Cavs’ locker room.

According to one local reporter, Drake was most definitely the aggressor.

This went all the way into the tunnel, with Drake calling Perkins a "f—— p—-" and calling for him to come out. "I'm here in real life," he said. He was mad. https://t.co/3DJ2HBvrWN

It is unclear why Drake was so angry at Perkins, but it might have had to do something with the fact that he just witnessed his beloved Raptors lose in heartbreaking fashion.

The Cavs and the Raptors will be back on the court at Air Canada Centre on Thursday night for Game 2. Following this ugly display, it will be interesting to see whether or not Drake is back sitting in his courtside seat.

If he is, his growing rivalry with Perkins will certainly be something to look out for.