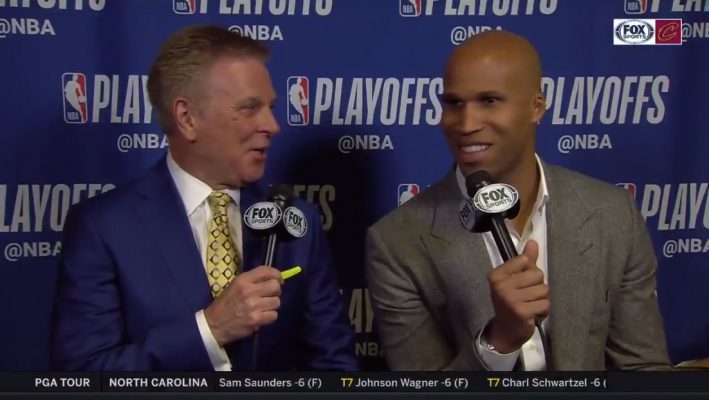 Another series, another game-winner. LeBron James can do no wrong.

Game 3 of the series between the Cleveland Cavaliers and Toronto Raptors was tied at 103-all with eight seconds remaining in the ballgame when James went the length of the court. As he got to his spot on the left side, the Cavs superstar took a one-handed bank shot off of one foot and delivered the game-winner at the buzzer.

It was the second game-winning buzzer-beater in as many series that James has made in the 2018 playoffs. This time, however, the shot was as unorthodox as any that anyone in NBA history has made to win a ball game.

In later interviews with teammates George Hill and Kyle Korver, it was revealed that James actually practices that shot in case he needs to use it someday.

Afterwards, Fox Sports Ohio’s Fred McLeod interviewed James’ former teammate, Richard Jefferson, who was as amazed as anyone that the King was able to make the shot. Apparently, James never practiced the shot when Jefferson was still on the team.

“You’ve never seen that shot?” McLeod asked, explaining earlier that he had seen it before.

“No,” replied Jefferson. “We don’t even play H-O-R-S-E but if we were to play H-O-R-S-E that probably would be the shot that he went to. Great players have the ability to take what’s given to them.”

"If we were to play H-O-R-S-E that is probably the shot he would beat me with." ? RJ knows he wouldn't beat @KingJames if he is making shots like that. pic.twitter.com/l5cssLA8tW

Later, Jefferson poked fun at his former colleague at the end of the interview:

“Good for him. I never liked the guy,” he said.